This is the last set of photos from our Tree Dressing event in Mayow Park on Sunday 4th December 2016. They were taken by Simon, a photographer working for Helping Britain Blossom who support The Orchard Project.http://helpingbritainblossom.org.uk
If you use any of these photos please acknowledge Helping Britain Blossom. 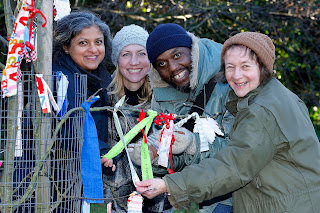 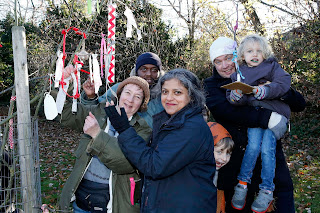 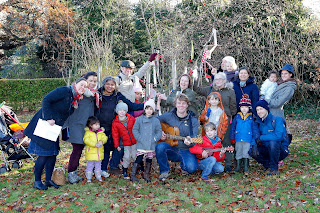 This set of photos show some of the tree dressing that took place. They were taken by Simon, sent to our event through Helping Britain Blossom.  http://helpingbritainblossom.org.uk/
Our event was publicised at the end of November on this link:
http://helpingbritainblossom.org.uk/tree-dressing-day-in-mayow-park-community-orchard/
If you use any of these photos please acknowledge Helping Britain Blossom.

Helping Britain Blossom was officially launched in October 2015. See  http://www.theorchardproject.org.uk/news-and-events/launching-helping-britain-blossom
On this website it says:

Helping Britain Blossom is all about helping local people create, restore and access orchards to enjoy and use for good in their own communities. A community orchard isn’t just a collection of trees, it’s a powerful way to bring people together.
At The Orchard Project, we’re really excited to be a founding partner with the opportunity to work with communities from all over the UK. Helping Britain Blossom will use our successful community orchard project model. Together we will share knowledge, skills and resources, supporting each other to reach out to communities to campaign for better use of public spaces whilst building healthier, happier and more sustainable communities.
And our Mayow Park Tree Dressing event is featured in the Helping Britain Blossom website: :
http://helpingbritainblossom.org.uk/tree-dressing-day-in-mayow-park-community-orchard/

I will post a selection of photos as three separate posts . Here we feature the story teller

In the woods with Amanthi for the story telling session 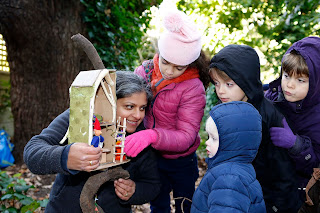 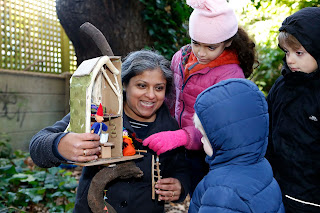 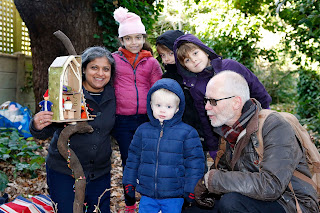 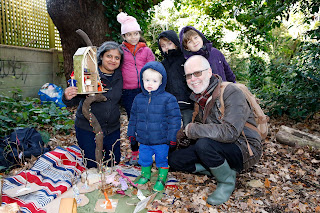 In the UK we tend to check the weather forecast with fingers crossed for outdoor events so it was a HUGE relief that Sunday 4th December,  the day of the Mayow Park tree dressing event, was sunny but very, very cold. Volunteers arrived at 9.30am to check the orchard site, set up the gazebo and collect tables. Story teller Amanthi Harris prepared the little woodland story telling space and a table for craft activities on the hard standing nearby.
The Friends of Mayow Park had decided to use the orchard as the space for celebrating this event. We had two reasons: 1) to highlight the strength of community involvement in planting and maintaining our orchard  area within a public park. In years to come this orchard should provide a wonderful place for people to gather, have picnics and organise orchard-based events across the seasons. 2) to remember former Chair of the friends of Mayow Park, Hilary Jarrett.
The park was already busy,being a sunny Sunday morning in winter, with dog walkers, families, joggers and others out for a breath of fresh air.  People started arriving at our gazebo from 10am to write messages on paper cut-out leaves or fabric and choose trees to tie on their messages.
Over the course of the morning three separate groups of  people joined us because they had heard about our event on BBC Radio London.What a wonderful surprise that was. It was included in Nikki Bedi's 'happening today' round up. Follow this link and go 50 minutes in
http://www.bbc.co.uk/programmes/p04hgjk1
but don't delay as it will only be available for a limited time - until 1st or 2nd January 2017 I think.

Most people preferred strips of fabric to tie on to tree guards, either with or without a message rather than cutting out paper leaves. We'll remember this for next year's event! 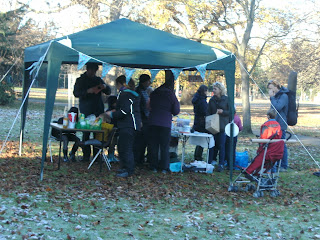 Although people could decorate any of the trees in the orchard (including a maple, a lime and a beech) the friends chose  one particular apple tree. This had been chosen and planted by Hilary Jarrett when we first created the orchard in 2012. Hilary had been a great advocate for Mayow Park and we wanted everyone to be aware of her important role in planting and maintaining this orchard. 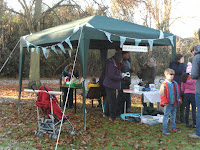 For the first 15 minutes or so we were very busy as families arrived. Refreshments (juice and sweets and apple pies) were more popular with the children than the adults.

It was soon time to call everyone for the story telling workshop. Children collected twigs to make mini trees and Amanthi showed them how to decorate using tissue paper.

When enough small trees were made, Amanthi led adults and childen (and not only parents/ grandparents) into the woodland to the story telling circle. All made themselves as comfy as they could on the log benches, ready for the story. In the photo above left, can you spot Harry the dog with his owners Robert and Valerie as well as the miniature trees made by children in the workshop session?


After story telling it was back to the gazebo to add more decorations to the trees and the following photos show just some of the fairy tale feel of the orchard at the end of the morning.

A photographer sent from Helping Britain Blossom arrived around 11.15am and took more photos of the story-telling and the singalong. His photos will follow separately and are MUCH more professional than any I have posted.
The final part of the morning was the sing-along, singing winter songs rather than specifically Christmas songs. Next year it would be great if we could have tree songs too.
There are many people who worked to make this a successful event. 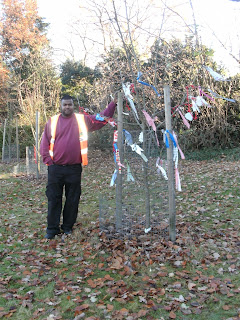 I will begin with our park keeper who brought tables and checked throughout the morning that everything was fine. He also wrote a message on a paper leaf which he tied to the Lane's Prince Albert tree. See photo

I will list here the people who helped and hope I can remember them all.  Please forgive if I have forgotten anyone:
Jackie and Richard and their two boys who came at 9.30am and helped to set up the gazebo
Angela, Robert, Valerie who helped  set up and stayed all morning
Carol and Jon for the large poster, string and other items. They had to leave as they had a  party to prepare
Sandra who travelled from Greenwich  to help
Annabelle C who brought seed balls for bird food to hand in the trees
Amanthi for her story telling
Amanthi's friend (Tom I think) who came with his guitar, having rehearsed songs for our sing-along.
And of course everyone who turned up to take part in this event.
Altogether we had 33 adults and 21 children over the course of the morning, according to the records on our sign-in sheets.
Posted by FOMP at 17:24 No comments:

What is Tree Dressing about? Why hold it in Mayow Park?

We all know that trees are important and that we should not take them for granted. Customs around the world include tying ribbons, writing messages on fabric, hanging objects and more. The celebration brings the community together to appreciate the trees around us. Mayow Park has some ancient trees but also a young orchard. Lots to celebrate.
Some people who heard about our idea wondered why we would be doing  Christmas decorating as that was what tree dressing meant to them. They were surprised that our celebration was not intended to be a Christmas event as it cuts across many customs and cultures. It pre-dates Christianity  as trees have been valuable to people for all time.Tree Dressing is celebrated all over the world  among many cultures at different times of year. A charity called Common Ground pulled customs together and revived Tree Dressing into an English cultural event. They started this  in 1990 for the first weekend in December.
But people are very busy at weekends at this time of year so how could we attract them to our event? We came up with more ideas: a story teller? singing round a tree? Try to ensure the date does not clash with other local events in Sydenham and Forest Hill. So the date chosen was Sunday 4th December 2016 from 10 am to 12.30 pm. The site we selected was the orchard. One volunteer brought lots of coloured fabric strips and helped to set up. Another brought string for tying objects to the trees and tree guards. A musician with young children brought his guitar to enhance our sing-along.  The Orchard Project through Helping Britain Blossom arranged additional publicity and a photographer.


So our ideas grew and preparations were made, permission sought and forms filled. (To be continued . . . )
Posted by FOMP at 12:07 No comments: