Mayow Park is located in Perry Vale ward in the London Borough of Lewisham. The annual Lark in the Park community event will take place this year on Saturday 30th June. Free entry. All welcome. 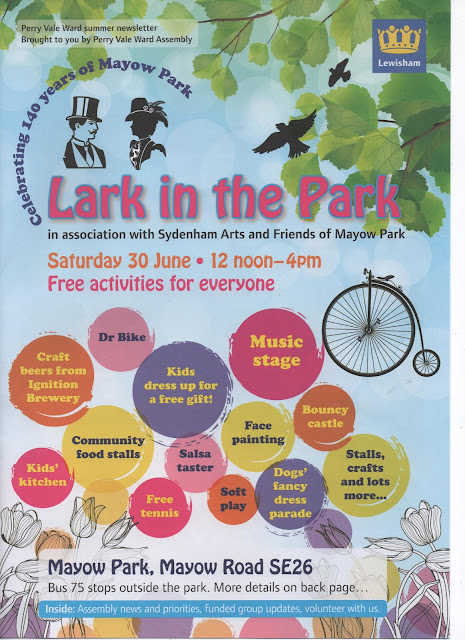 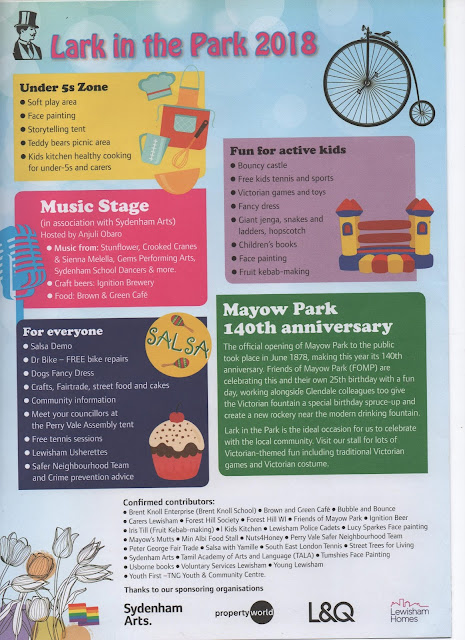 Email ThisBlogThis!Share to TwitterShare to FacebookShare to Pinterest
Labels: events, Lark in the Park

A warm, pleasant evening and over 40 people came on our tree walk round the park on Friday 22nd June at 7pm. We walked round seeking some of the less well-known trees as well as recognising the old, familiar characters. Parkland ornamentals as well as veterans make the trees of Mayow Park so special.
So that children would have a focus  (there were about 8 children there) a sheet with 12 tree names was handed to them. They had to find the trees as we walked round, give the trees a hug or try a bark rubbing, and remember the names of the trees they found. For each tree they received a nature stamp on their sheet.
We came to the black walnut tree Juglans nigra, planted in 1994 by the Friends of Mayow Park (known at that time as Mayow Park Users' group). A non-native tree, it can grow to over 30 metres high. It needs plenty of light and prefers a fertile soil.
Further along the meadow is the black poplar Populas nigra, donated and planted in 2012 by Glendale (the park contractors) to commemorate the Diamond Jubilee of Queen Elizabeth II's accession to the Throne. Black poplars can live up to 200 years and this is a native tree. There are other poplars in the park whose age we can only guess at and there was some debate about whether they had been planted before Mayow Park was created.

The majestic evergreen Cedar of Lebanon, originating from Lebanon and the eastern coast of the Mediterranean, stands proudly looking down hill from its vantage point near the De Frene Road entrance.
We found Monkey Puzzle trees and lovely limes, a golden weeping willow and strong hornbeams. 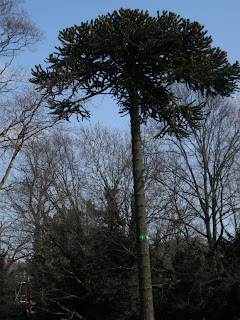 A holm oak which has been a popular climbing tree through the generations. People now in their 40s and 50s bring their own children back to the park to share memories of this tree.
Horse chestnut is still a popular tree in autumn when children gather its conkers. How many can you find in the park?
Plenty of maples were planted in the park in the past, along the path edges.  Some have thrown up suckers and look more like maple bushes than trees. One has formed a den much loved by young children.

We must not forget the wonderful veteran English oaks, Quercus robur, many of which were pollarded in bygone days. These are all older than the park and may have once been part of field boundary hedgerows. They are affectionately known as the boundary oaks.  This park has more than 20 such trees. Very old trees like these are valuable for wildlife. They contain dead wood particularly good for many beetles whose larvae feed on dead wood.  Holes also make good homes for nesting birds and small mammals.

A copper beech, a blue cedar, a tulip tree and a tall Dawn Redwood, Metasequoia glyptostrboides, are some of the other specials in the park. To appreciate the dawn redwood in all its glory it is worth getting close up, to see the bark and the leaves. This is a deciduous conifer, shedding its leaves every autumn.

It was great to see Friends of Mayow Park (FOMP) volunteers and Glendale staff working together on 12th June 2018 on a joint grounds maintenance project to improve part of the park. This work was not part of the usual maintenance routine but had been identified as work we could do together in  celebration of Mayow Park’s  140th anniversary as a public park and Friends of Mayow Park’s quarter century as a park user group. On 1st June1878 the Sydenham and Forest Hill Public Recreation Ground (later renamed as Mayow Park) was formally opened. Friends of Mayow Park (previously called Mayow Park Users’ Group) held their first meeting in April 1993.
AIMS
The aims of the joint Glendale and FOMP session were agreed:
VICTORIAN DRINKING FOUNTAIN:
The Victorian drinking fountain stands as a memorial to the Rev William Taylor Jones and a symbol of Victorian philanthropy. It remains an attractive ornament although the water supply through lead piping was blocked way back in a bygone age. If you look carefully you will see the filled-in holes from which water flowed. Hilary Jarrett, who was Chair of the Friends of Mayow Park in the early this millennium, looked into the possibility of restoring the fountain. However, expert advice warned that such a project would be immensely expensive and risk causing serious damage to the granite fountain. It was far better to keep the fountain as it is for it to remain an acknowledgment of the past.

The fountain called for a clean-up to celebrate its position in the park and that call was answered by Ian, with a bucket and long- handled brush.


We now have the modern drinking fountain, beside the rockery,  paid for by a grant to FOMP and installed by Glendale a few years ago, thanks to Hilary’s persistence in seeking funds.

Behind the modern drinking fountain stands a rockery. Every spring flowering bulbs grow in the rockery before the forest of elder, ivy, bindweed, overgrown holly and other plants take over. The rockery was revealed today when the team cut through the dense undergrowth.

Suitable rockery plants for shade were planted. These were sourced by Glendale, purchased by the Friends and planted by Glendale’s grounds maintenance staff and also acknowledge times past. 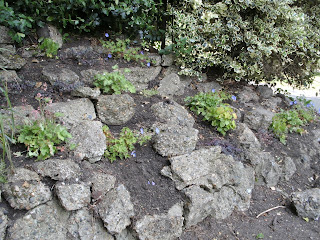 FRUIT BED
Nearby, close to the modern drinking water fountain, the Friends tend fruit and herb beds. Today the fruit bed saw five volunteers hard at work. One started pruning the fruiting hedgerow on two sides of the bed. The others cut back the grass growing round the redcurrant bushes, the raspberry canes and the fruit trees, releasing these plants from hiding. The grass in the central space was also cut so that people can now bring their picnic mats and enjoy a less overlooked space. No photos of this at the moment.

MAPLE DEN
Directly opposite the fruit bed is a bench and a maple tree stump surrounded by maple stems which have suckered up to surround the stump and create a ‘den’ for children and adults to explore. The stump itself is a haven for invertebrates and possibly even elusive stag beetle larvae hiding deep in the dense wood. The suckered growth was overgrown and needed thinning, brambles growing through it and covering the ground.

So a team armed with loppers, saws and secateurs worked to thin back the maple growth and cut through the brambles. The work also revealed the variegated holly behind the maple stems.  Children and adults can now enter the den without scratching themselves on thorns.

OLD AVIARY SITE
The site near the tennis courts, where the aviary used to be, is referred to as ‘the hard standing’. It has a privet hedge and a fruiting hedgerow. Glendale staff trimmed the privet which had become overgrown and straggly. The fruiting hedgerow was carefully pruned to leave the flowering wild roses which add colour  to the space and encourage insects. 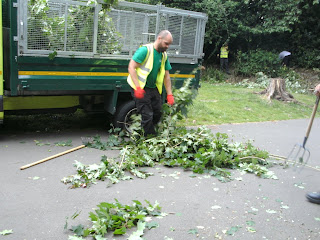 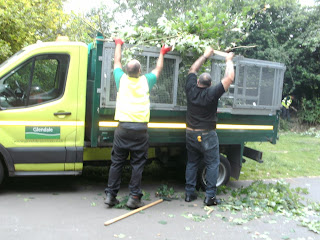 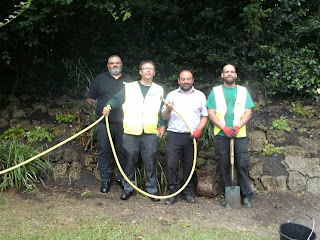 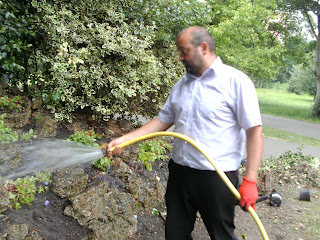 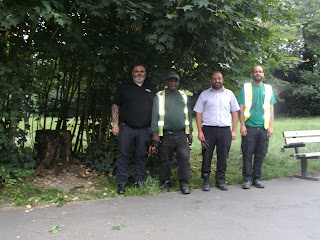 Friends of Mayow Park (FOMP) and Glendale (who manage the park on behalf of Lewisham Council) are getting ready for a joint working session on 12th June 2018 as a celebration event. Friends of Mayow Park first met in April 1993 (as Mayow Park Users' Group) and, for our 25 year anniversary, we would like to mark that occasion by working together with Glendale to brighten up one part of the park.

FOMP volunteers plan to clean up the Victorian granite water fountain in recognition that the park itself celebrates an anniversary - 140 years since it was officially opened to the public.

The volunteers will also tidy up the Triangle herb and fruit beds in front of the cafe. It there are enough volunteers we may do some additional work in the orchard.
Together with Glendale we will create a new rockery near the modern drinking fountain, an idea suggested by a park user a few years ago.
Opposite the rockery and next to a bench is a wonderful maple 'den' created after a diseased maple tree had to be felled some years ago. The stump is still there but around it have grown suckers to create a dense hideaway. We intend to cut back some of this growth.
And that is not all we plan to do.
We welcome more volunteers, for a short while or the whole session. If you can, bring a trowel or a spade. If you don't have tools we have a few.