What a summer it has been. After a particularly cold winter, followed by   an exceptionally wet spring, who would have thought that this past summer in southern England would be so very hot, humid and without rain?
This took its toll on plants, including trees. The Mayow Park orchard trees were showing signs of stress. The oldest trees were planted early in 2012 and the others were planted in early 2016. A plea was sent out asking for orchard carers to water selected trees and six people came forward, three of whom were helping out for the first time.
The need to provide 20 litres to each tree once a week, rather than frequent small amounts, was explained and understood. Small amounts of water dampen the very top of the soil but 20 litres should soak down and reach the roots.
There was one difficulty; no easily accessible water supply. Over the past few years our orchard carers have found ingenious ways to bring quantities of water to the trees including bringing a large water container in a child’s buggy and carrying 4 lots of 5 litre spring water bottles  filled with tap water in a shopper’s trolley bag on wheels.
One orchard carer put pen to paper to reflect on the task they had agreed to take on.


Well, my young son comes home from school every day with messages about the environment...all the things we shouldn't be doing, using plastic, driving the car etc etc. While I appreciate the eco drive in school it was getting me down a little...all this negative talk. So when I saw a post asking for help with the young trees in the park I thought this might be a lovely thing to do together that was actually going to have a positive impact on our local environment.

I have to say I was a little overwhelmed at first with the logistics of getting 20 litres to our designated tree every week but I realised a little hodgepodging with a bike trailer and tub trug and smaller jugs it could be done relatively easily. We did get some slightly odd looks filling up at the cafe toilets but my chatty son was quick to explain what we were up to, to anyone who paused long enough to let him. The dog also liked to join in...I'm sure the tree won't miss the few laps of water he stole too much. As the summer went on my son's enthusiasm did wane a little, so we introduced ice lollies post watering as a reward. We enjoyed them beside our tree hoping that he was also feeling refreshed and cooler after our efforts. 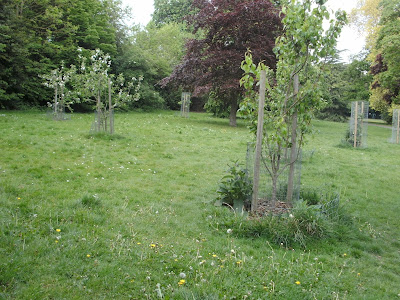 Thank you to that family for all their efforts. The good news is that the younger trees, with that bit of extra TLC, avoided serious dehydration. The older trees (planted in 2012) without individual carers had a much harder time. They had more fruit drop than usual during June and many of the remaining fruits showed peck marks from winged birds (possibly the parakeets) who were suffering from lack of food.


Unfortunately the remaining UNRIPE fruits on all the fruit trees were  picked off one day in July by person or persons unknown, with no fruits remaining, not even windfalls. We had hoped to share some apples with park users at our Apple Day on 6th October and to compare the different tastes. Our default option is to buy a number of commercial varieties for tasting instead.
Posted by FOMP at 15:03