In memory of Fred from Glendale

At the Friends of Mayow Park meeting last Saturday 24th January, we took a moment to remember Fred from Glendale. For many years Fred was a familiar Glendale face at many of Lewisham's parks. He did much of the maintenance work in our park and was a good friend to the Friends. His most recent visible activity in Mayow Park was installing the plaque at the drinking water fountain on 29th October 2014. Fred passed away unexpectedly at the end of December. He will be greatly missed and our condolences go to his family. 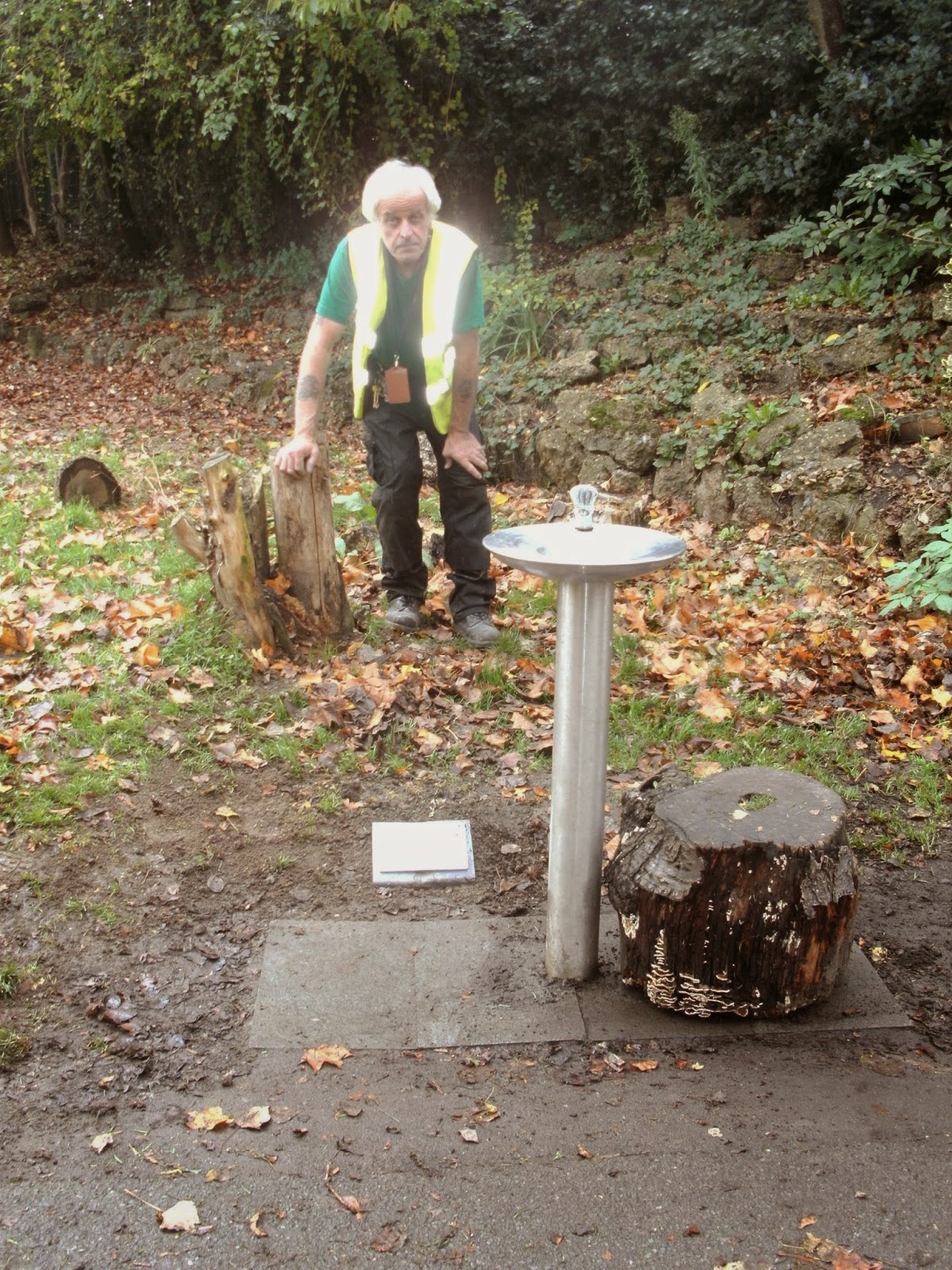 Mayow Park is one of the parks in the borough with a Christmas tree recycling point. Hundreds of trees have been brought her since Christmas. Sometimes Glendale take the trees away to shred elsewhere but a couple of times they came along to the park with their shredder. What a great job they did. These photos are from 5th January. 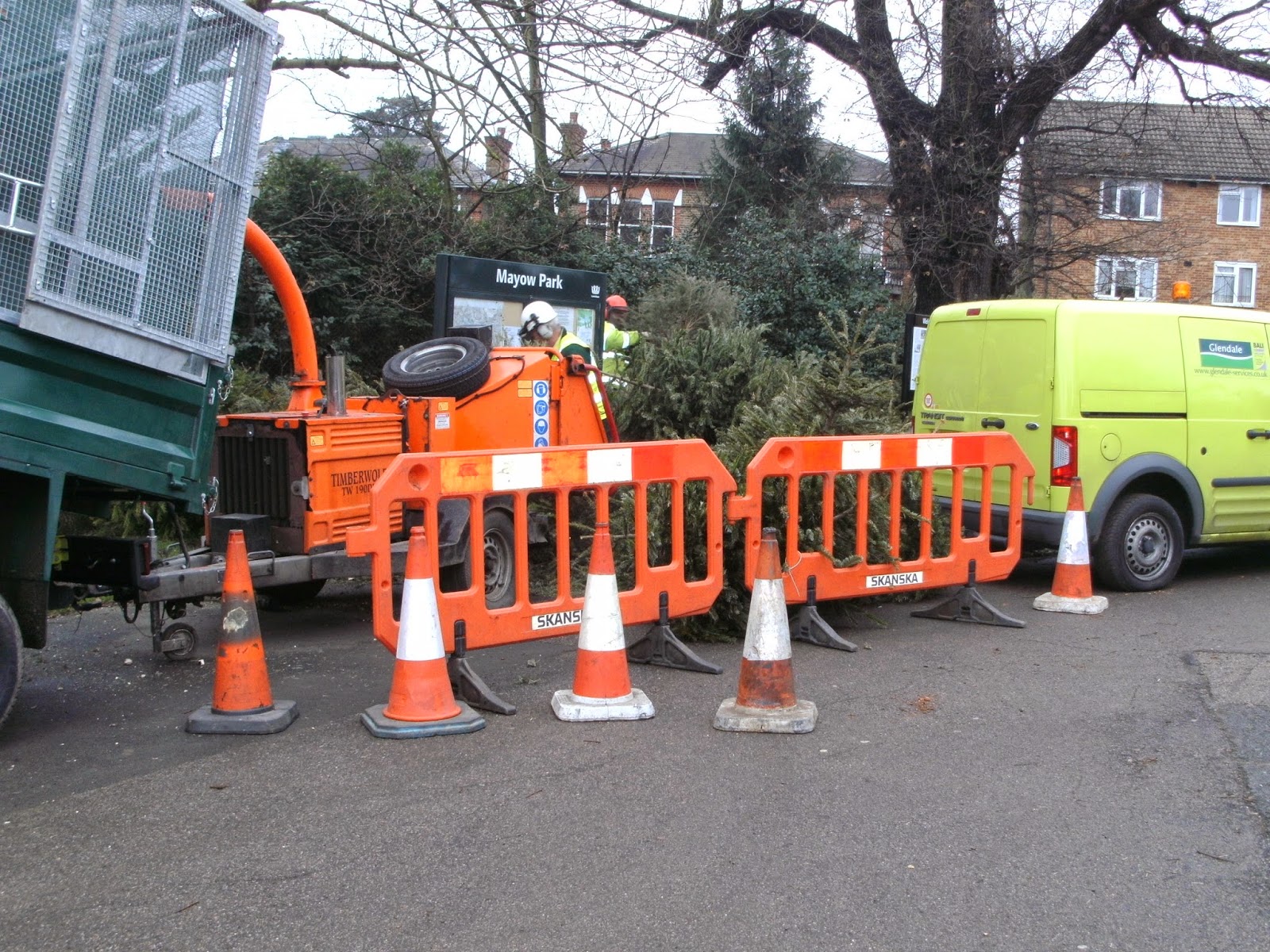 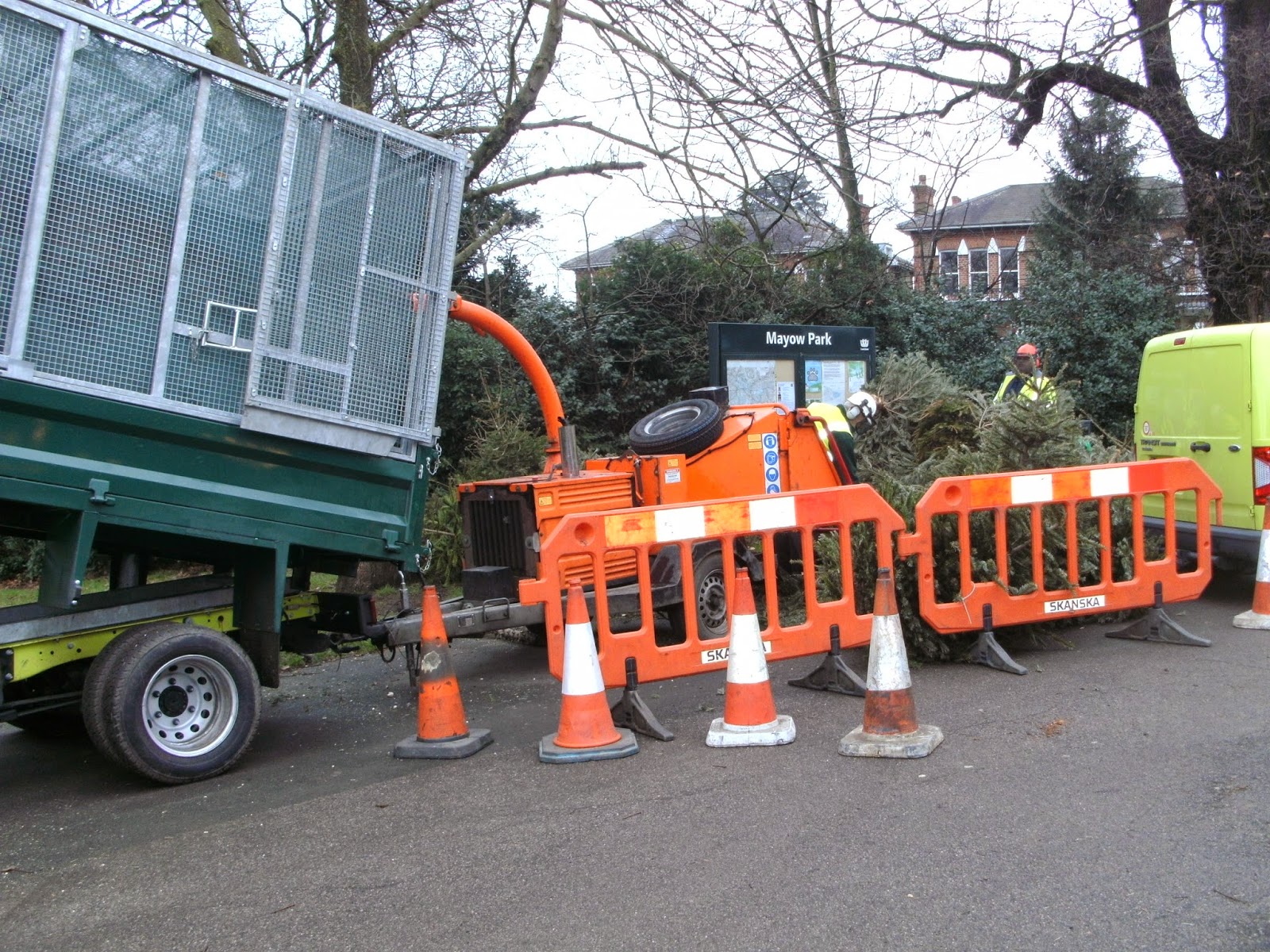 It was a noisy business but very productive. The fresh shreddings can be used for mulch on paths in parks and nature reserves. When they are rotted they can they be used on plant beds and round trees.
Posted by FOMP at 15:15 No comments: 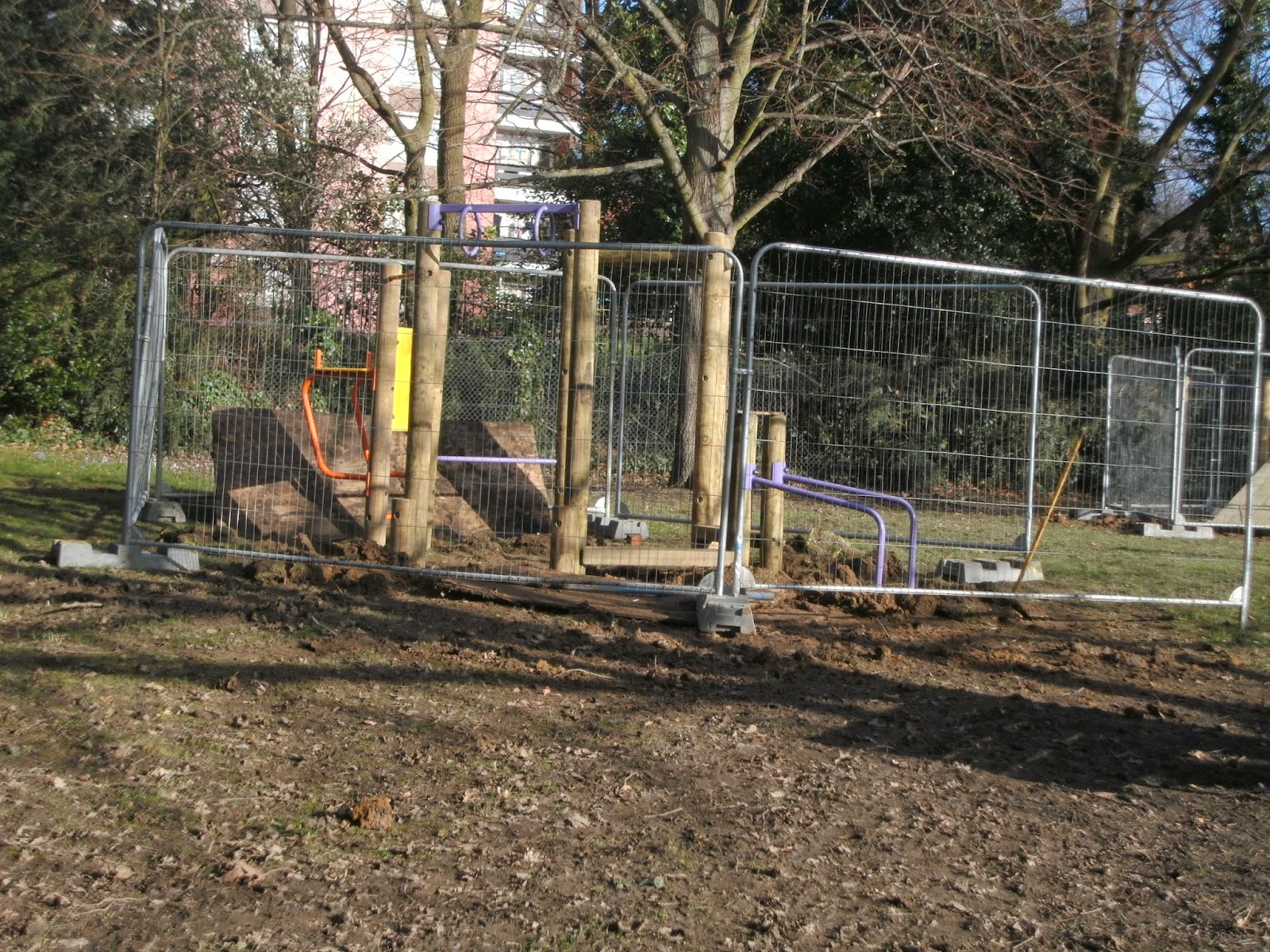 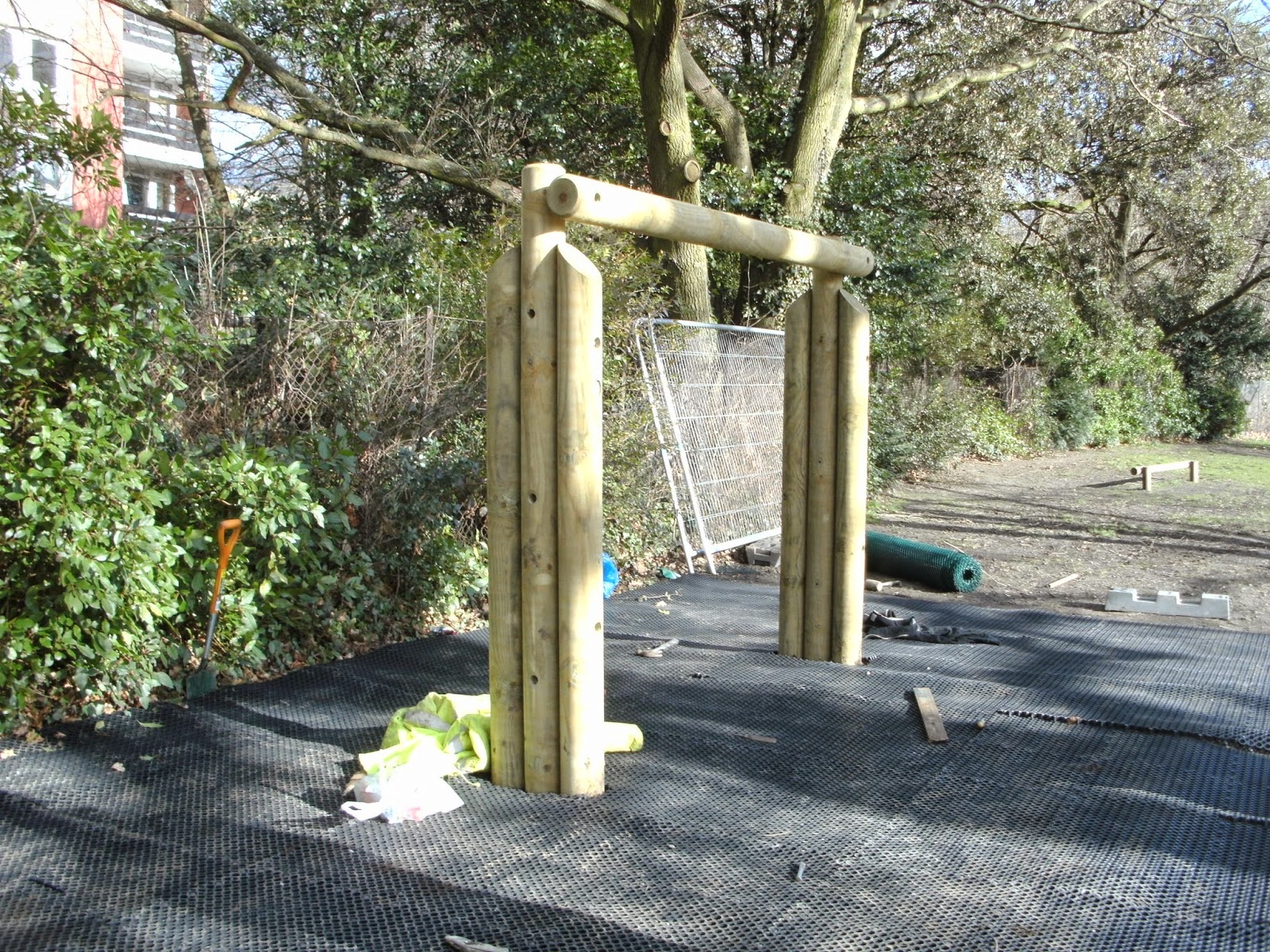 Mayow Parkers can look forward to getting into shape in 2015!
Posted by FOMP at 15:04 No comments:

Tuesday 27th January 2015, an exciting day for Mayow Park and a good start to the new year . . . work starts to install the outdoor gym and trim trail.
Wind the clock back to the summer of 2014. The Friends of Mayow Park were told that there had been a successful bid for funding for fitness equipment in the park. The Friends wanted park users to be consulted so Glendale prepared a survey in late August. We had 10 days to get the survey completed.
Some of the Friends committee, along with Tunde, who was our park keeper at that time, gave out the survey sheets to families, dog walkers, joggers, fitness fanatics, in fact anyone who said they used the park and was willing to fill in the form. People were asked what percentage of the available fund they would like to be spent on an outdoor gym and how much on a fitness trail and to mark it on a scale. When the results were in, 169 forms were counted: results 70%  outdoor gym and 30% fitness trail. 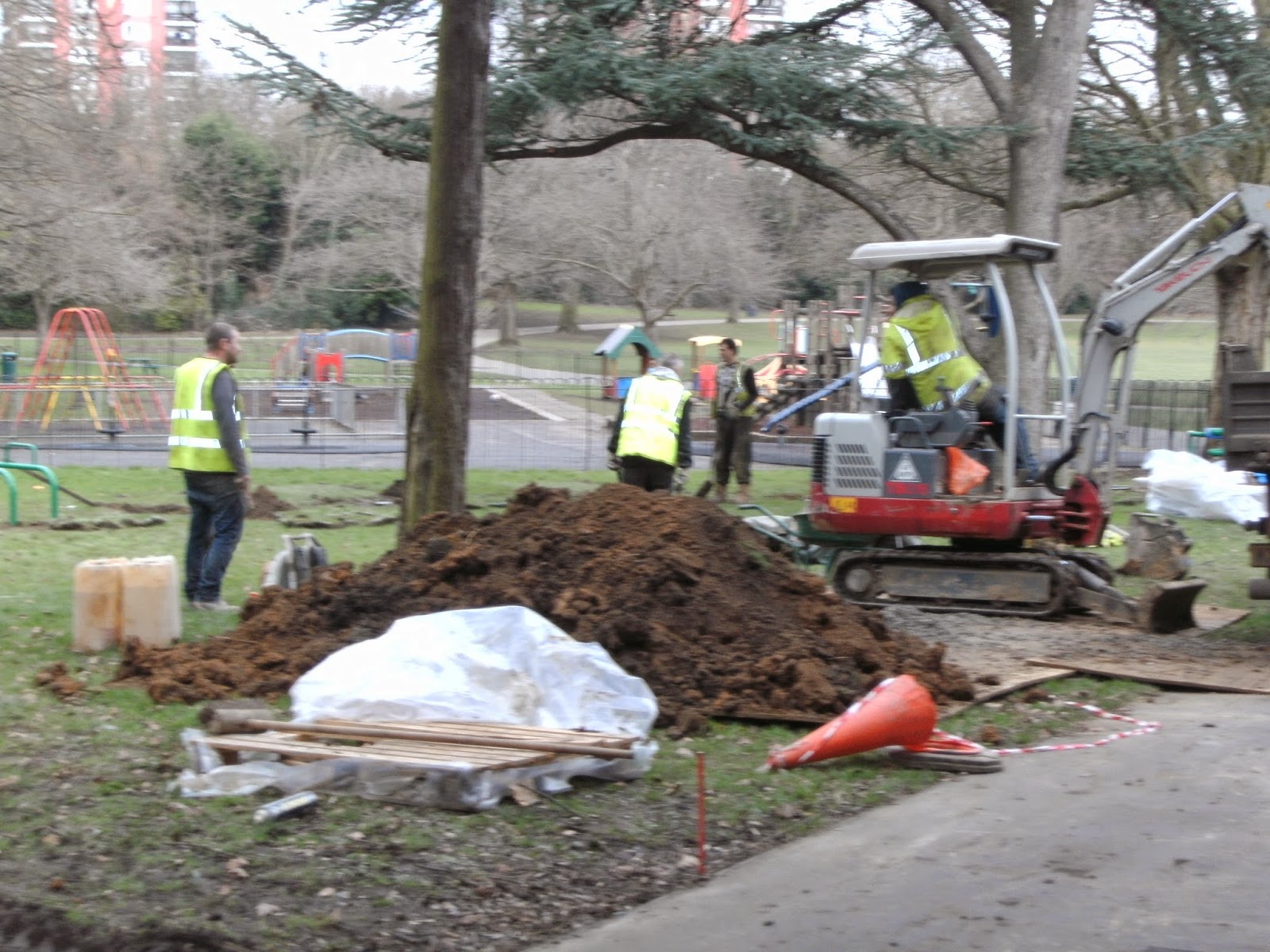 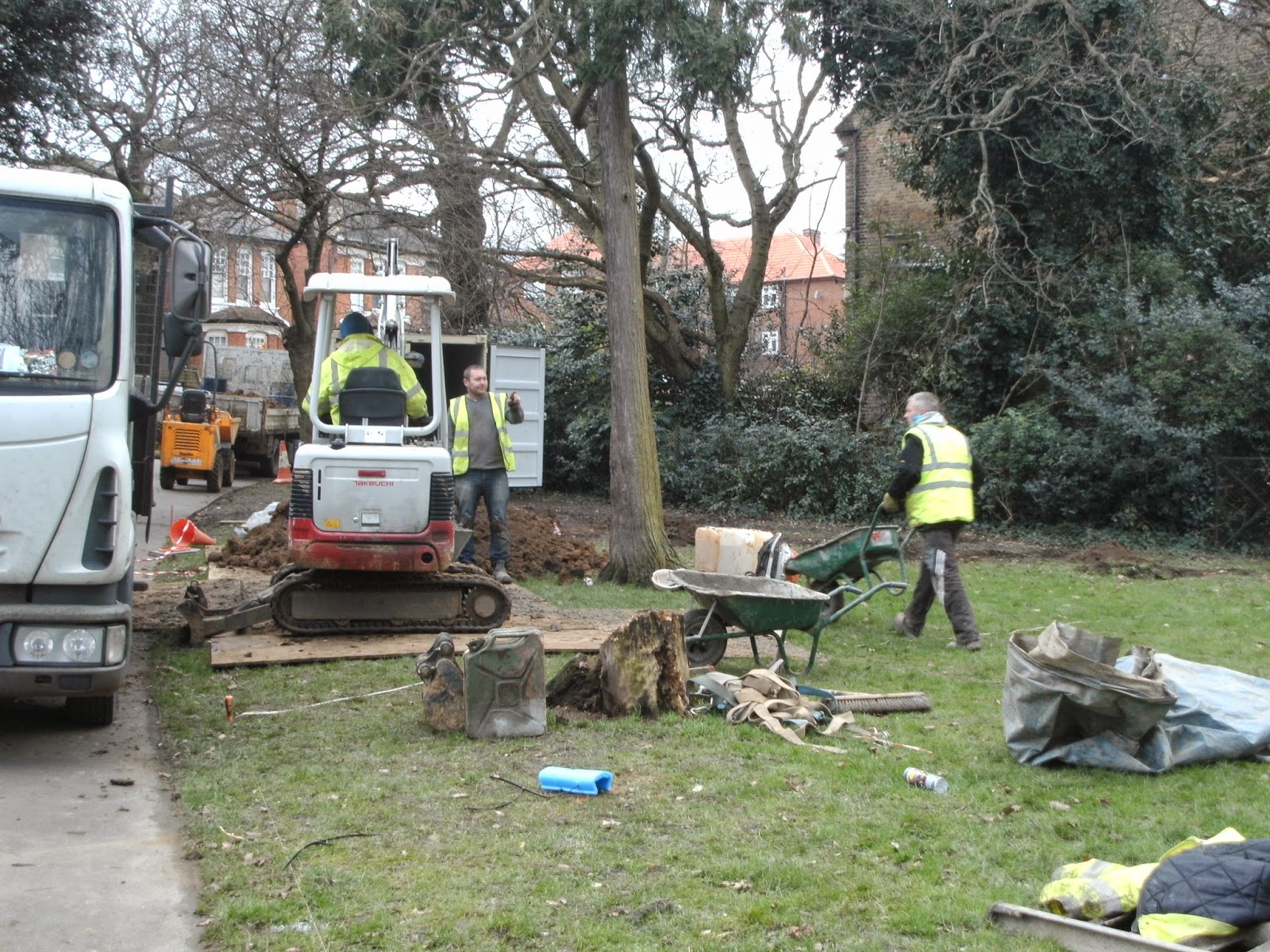 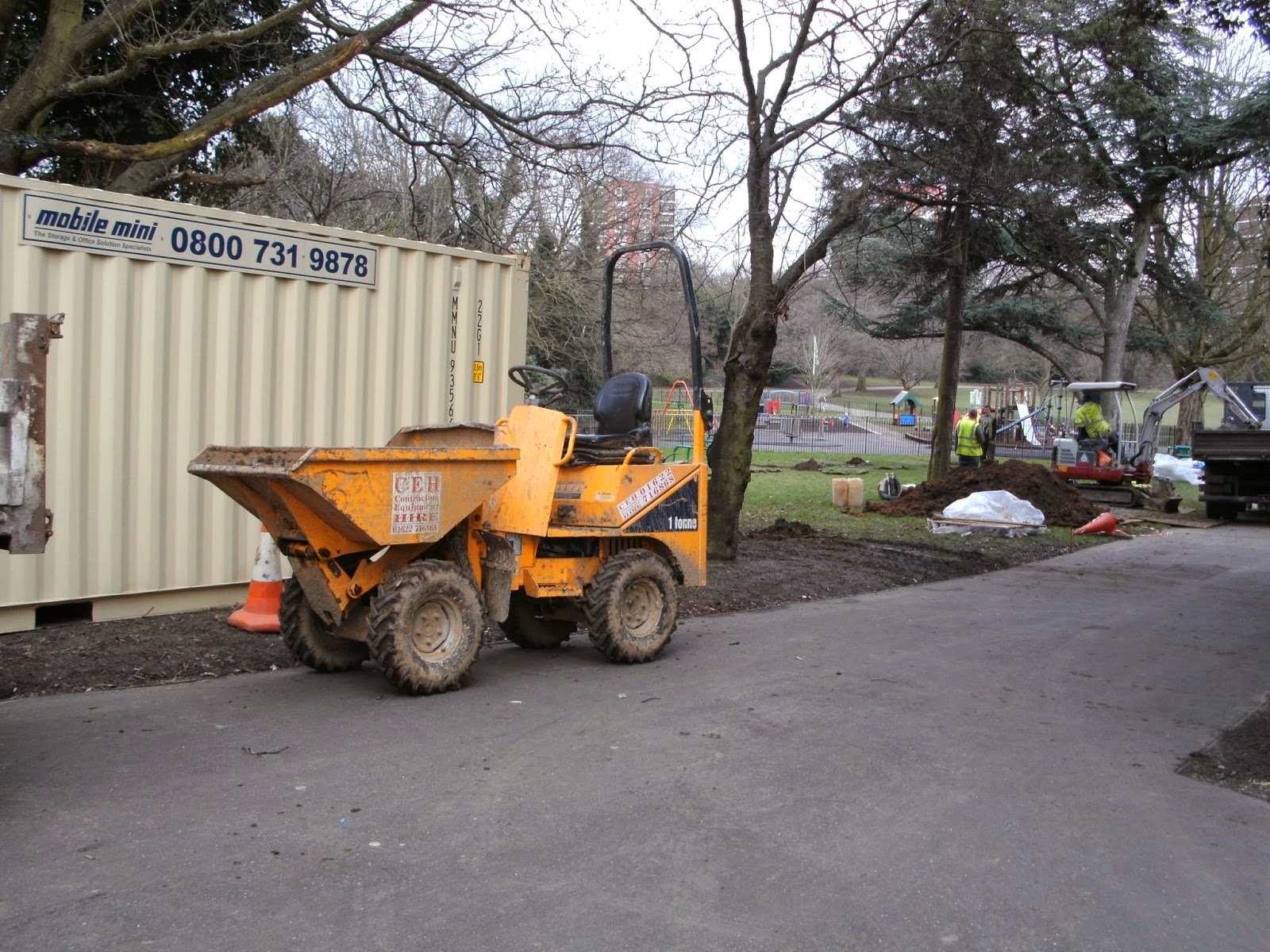 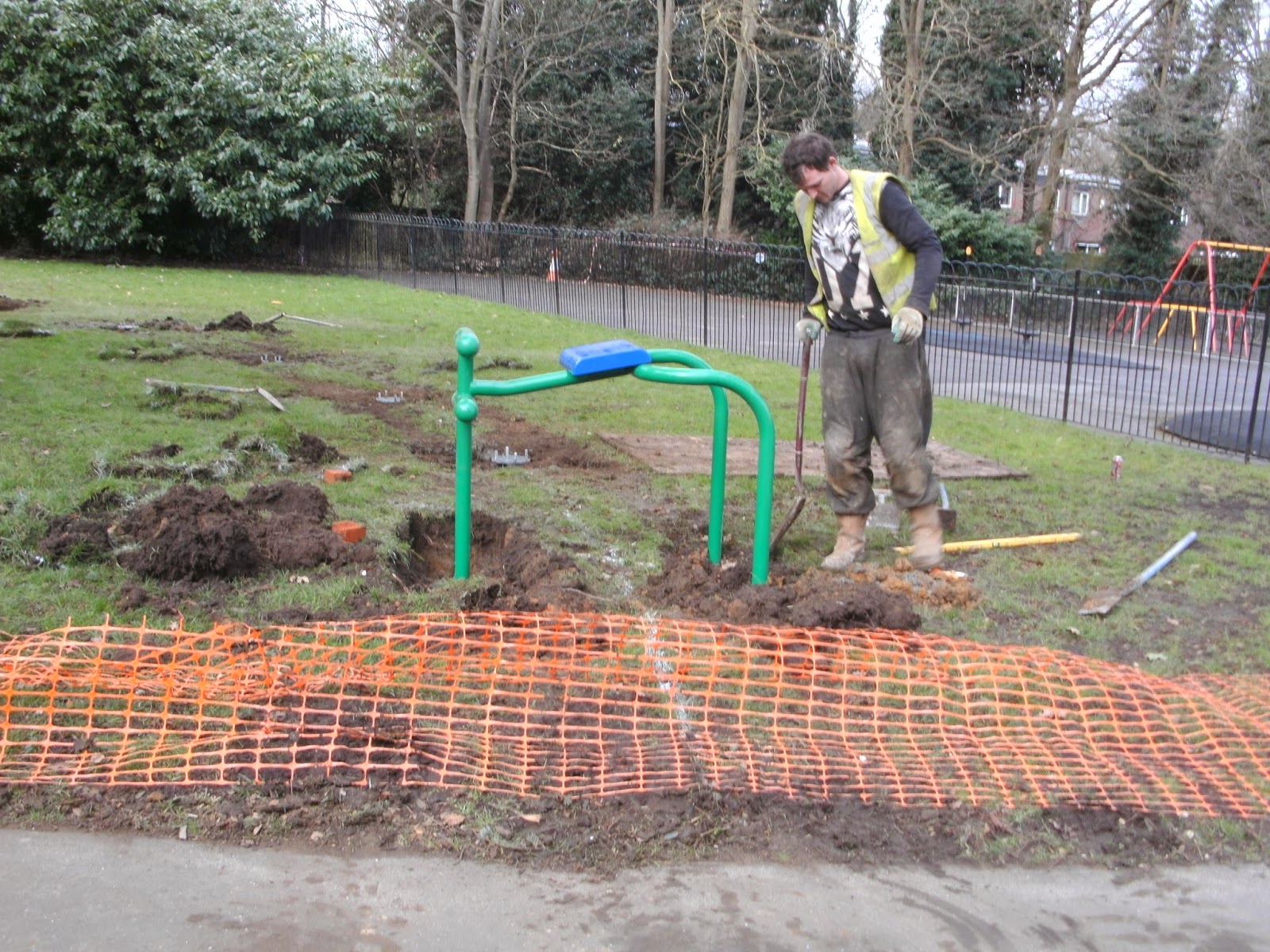 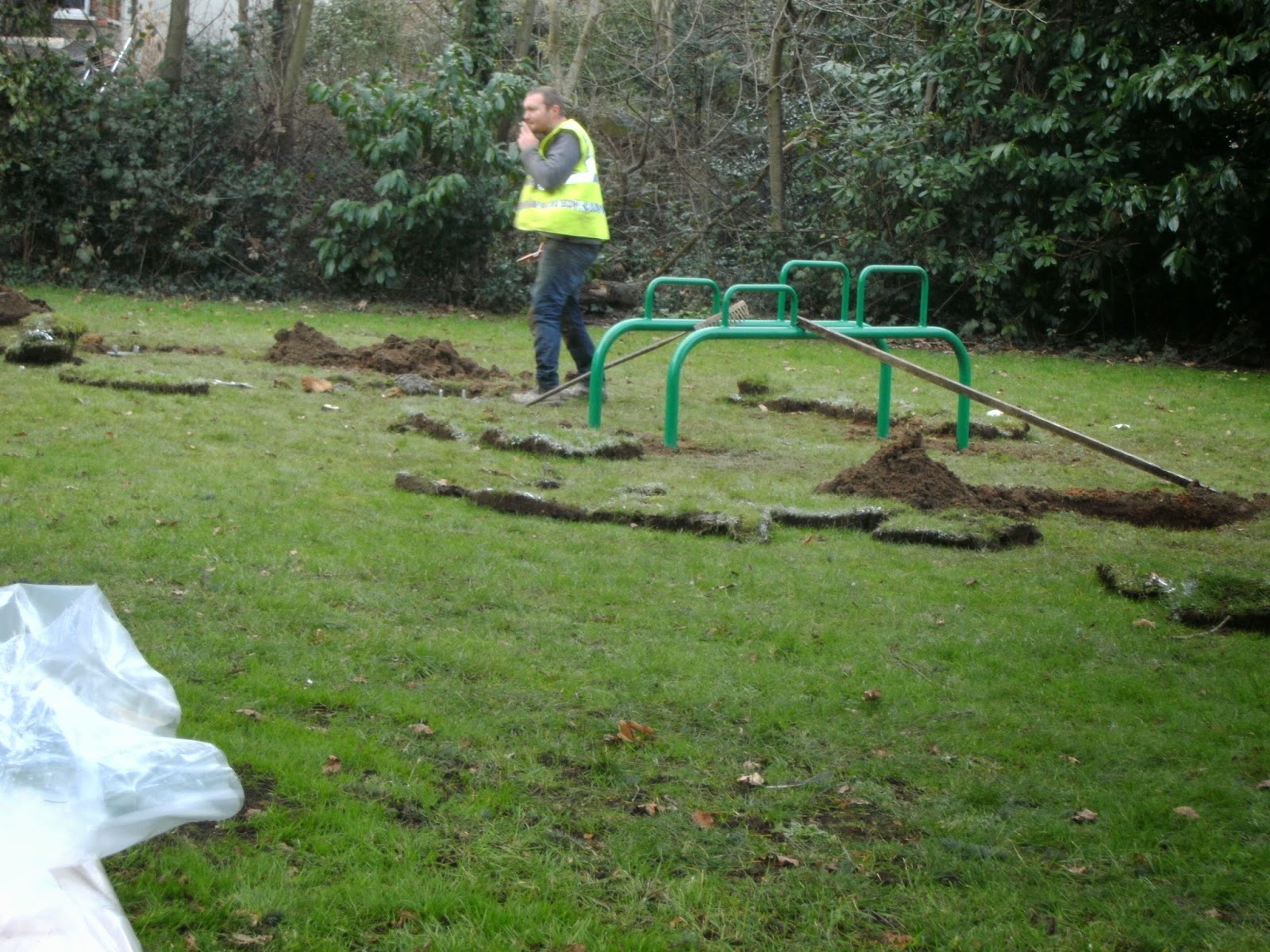 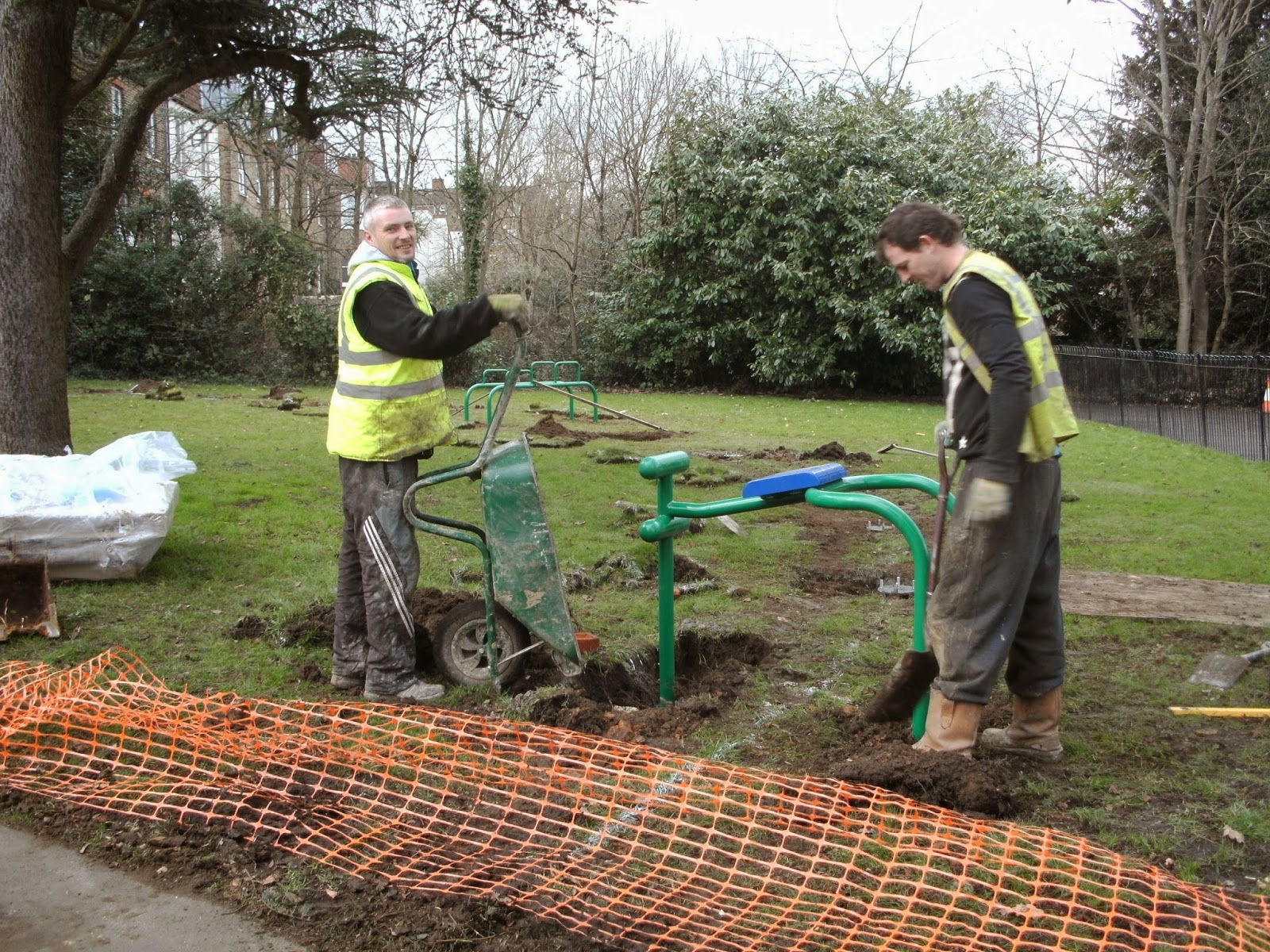 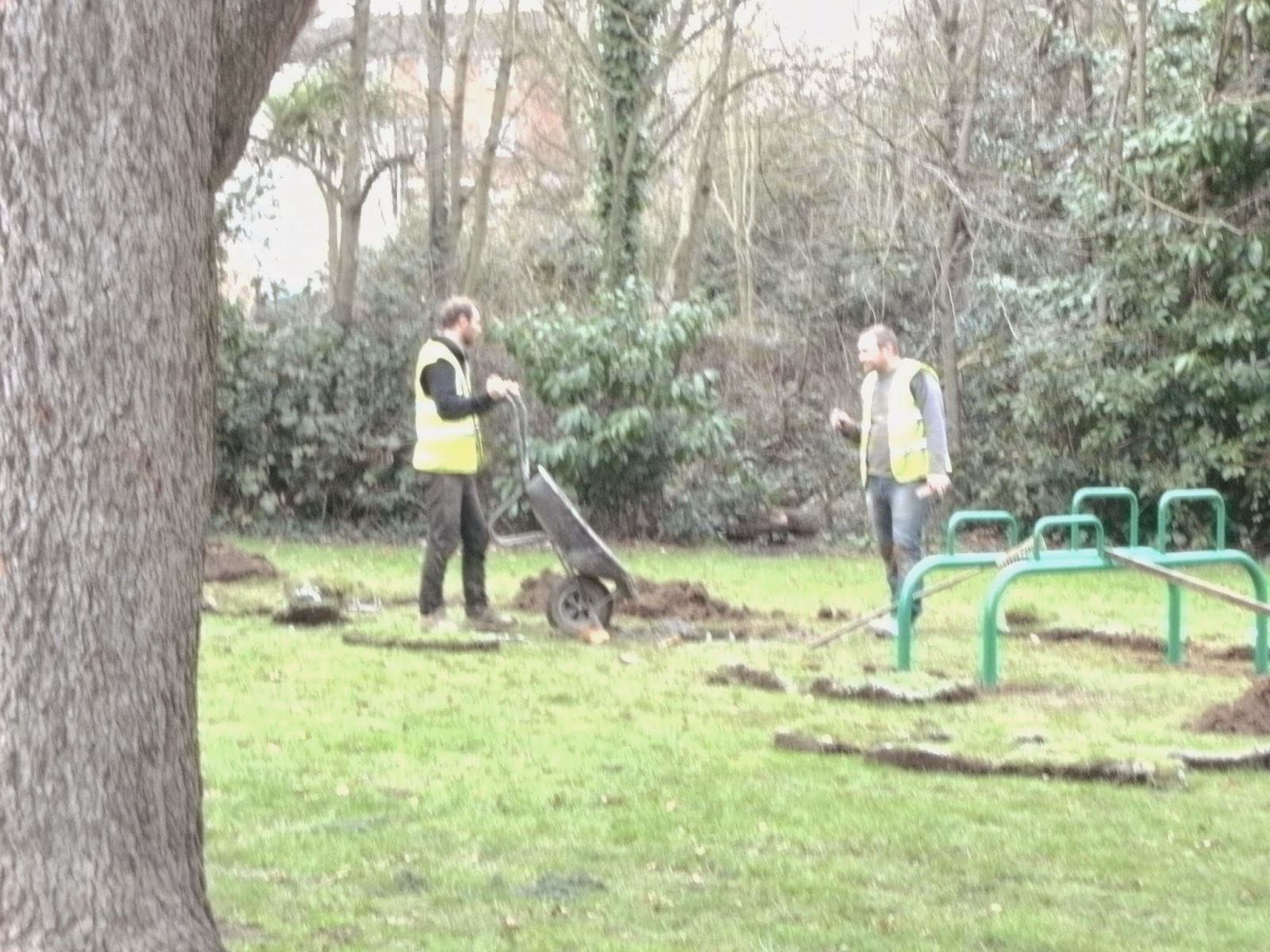 Glendale and Lewisham sent out tenders. I don't remember the name of the firm that was finally chosen but I will ask. We will see the final outcome in about a week.

Our next Friends of Mayow Park meeting will be on Saturday 24th January 2015 at the Bowls Cabin.
1pm for the AGM
1.30 - 3pm for the general meeting.
Come and join us.

A short AGM with voting for officers, will be followed by our regular quarterly General Meeting & discussion about the park.

All park users welcome.
Come along & find out what's happening in Mayow Park in 2015