November can be rather unpredictable weather-wise so we were delighted that the forecast was for a dry day with some sunshine.
Friends of Mayow Park(FOMP)  had arranged with Glendale Lewisham (who manage the park) that they would come and do some necessary maintenance work with FOMP volunteers working alongside.
Some Glendale staff worked on planned maintenance work elsewhere around the park making the place look and sound like a hive of activity.
We've been awarded funding for more picnic benches - some at the other side of the park and  some for the picnic area, which is why we were sprucing it up.
We wanted to tidy up the picnic area, clear away some of the overgrown hedge behind the space, tidy up the picnic benches which we acquired some years ago, clean up the sitting benches beside the overgrown hedge and refurbish the triangular green metal picnic table so it will be available to use for many more years.

Glendale brought equipment to cut back the hedge, water to jet wash the picnic benches, sand paper and paint.
While FOMP volunteers and some Glendale staff worked in the picnic area, others removed an old, battered and untidy noticeboard which had long stopped being useful. It took much effort to dig up the concrete base of that one and we were too busy working capture the effort on camera. They also repaired the other noticeboard facing the children's playground and picnic area.


Did all this effort make a difference?

We did one more special thing: Mayow Park, along with quite a few other Lewisham parks, was awarded another Green Flag. Glendale, with Pippa's help,  took down the old flag and put up the new one.


And then it was time for a group photo, but some were too busy to join us.
Thanks go to the Glendale managers and all their maintenance crew for coming along to enable FOMP to work alongside them. 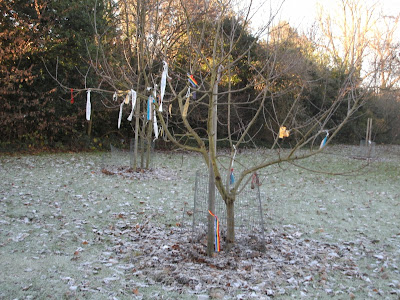 Friends of Mayow Park invite you to our event:
Tree Dressing
A winter celebration
of our orchard
Saturday 30th November
10am – midday

Decorate our trees using items from nature or by writing a message on fabric.
We’ll have some, but please do bring any
fabric or ribbons to hang in the trees.

MEET AT THE ORCHARD
(near the tennis courts)
Free event - donations welcome.

For more information or to offer help, email friendsofmayowpark@ymail.com