We had a very productive Orchard Summer Pruning and tree care session on 24th June with a total of 12 adults and 5 children. Good weather obviously plays an important part in determining how many people are able to take part, so that was a good start. We put up our gazebo to signpost our presence and placed our sign board nearby so that passers-by would recognise who we were and what we were doing. 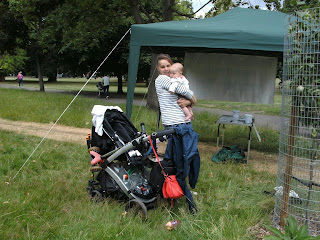 As usual on these occasions we went through the risk assessment, safe handling of tools and list of tasks for today. 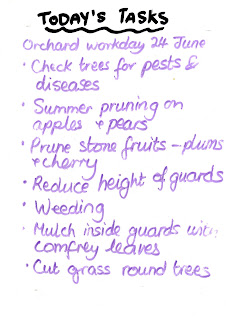 First up was to check trees for pests and diseases. We found some ant and aphid activity on two trees, most noticeable on the Cox's Orange Pippin; some leaves on some trees had evidence of leaf miner but nothing to worry about. Some leaves on the pear trees are starting to show signs of rust but this should not cause serious damage. Many of the apple trees are bearing heavy loads of fruit so we thinned out clusters to prevent disease and encourage the fruits to grow bigger.

Before pruning started in earnest we ran through the reminder of what to look for with the branches:
DEAD, DAMAGED OR DISEASED
CROSSING OR CONGESTED (i.e. overcrowded)

The plum and cherry trees can only be pruned in summer as winter pruning risks developing Silver Leaf, a fungal disease that could destroy a tree. It is probably better to summer prune in July and August but today was our workday for this task.
Before we could prune, some of the tree guards needed to be reduced in height. They have helped to protect the trees pretty well, despite two guards having been damaged during the past few months.

While the pruning was going on, Sue with her able assistant Christopher (aged 4) were cutting down the comfrey plants, putting them into the wheelbarrow, then chopping them up into small pieces to put round the trees as mulch.


Two other able-bodied young helpers were Thomas and Daniel, watched over by Carol while Jonathan cut down the guards around the quince.
We also had two babies (under 12 months old) supervising us and other adults not in these photos.
Half-way through our work Lewisham's Mayor, Steve Bullock, came to officially open the newly refurbished tennis courts. They have been open for a few weeks already  and have been welcomed by most  of our enthusiastic tennis players.


We were invited to join in to see the cutting of the ribbon  and share in the delicious strawberries and cream cake.These photos of the Mayor and the cake were taken by Carol Robinson. 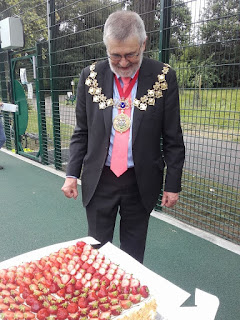 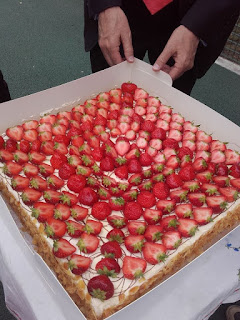 And here are photos from the official photographer, including
- a group photo of the Mayor, tennis players, young children and the orchard volunteers
- the tennis courts
- the amazing cake 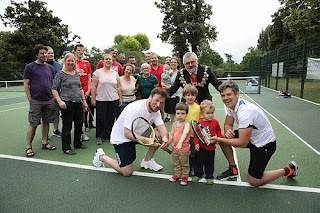 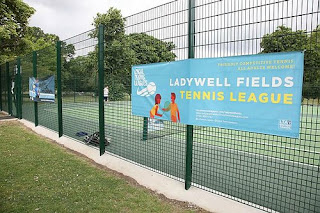 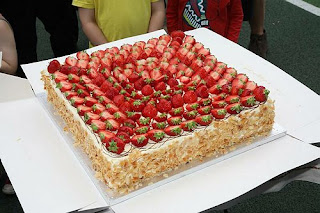 Three hours of orchard work by the team of volunteers passed by very quickly and the opportunity for a group photo was lost as people went home. In addition to pruning, guard height reduction and comfrey mulching, we also managed to weed round the trees and cut the grass round them.
Posted by FOMP at 11:45 No comments:

Mayow Park has an impressive number of pollarded boundary oaks, planted between 250 and 300 years ago to mark field boundaries, before the existence of the public park we know today.
Boundary oaks indicate a once common farming practice to mark land and field boundaries in the same way as walls and fences.


Pollarding is a pruning method used for centuries to manage trees. The upper branches are removed when the tree is still young and in the case of these ancient boundary oaks they develop new upward-growing branches which over the centuries become as thick as mature trees and look like respectable tree trunks in their own right.
Daniel Greenwood (from Sydenham Hill Wood, a stone’s throw from our park) has written about boundary and pollard oaks in nearby areas and you can read his fascinating article about some of the trees here:  https://danieljamesgreenwood.com/tag/boundary-oak-trees/
So Mayow’s ancient oaks reflect past local land management, while providing habitats for a large number of flora and fauna today. Birds, small mammals and invertebrates make their homes in the hollows, fungi and mosses find somewhere to grow. The trees contribute to the character of the park and park users have often said that the Mayow trees are valued in making the park landscape so special.
When a lovely tree that has stood for centuries loses a major limb many of us express sadness, as happened to a pollarded oak in Mayow Park on 19th May 2017. A local resident posted a photo to Friends of  Mayow Park Facebook group, thus alerting park users and the park maintenance team. 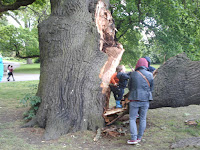 The tree that lost a limb had the widest girth of any of the ancient trees in the park as measured on a tree walk in 2016.  Word quickly spread. Soon adults and children were seen clambering over the fallen limb and around its broad branches,  enjoying the opportunity to get close and personal.   A tree that probably few had noticed became a celebrity overnight. It was lovely to see how people engaged with the tree. But current concerns about health and safety, with the risk of someone falling and injuring themselves, was too great. Something had to be done.
Within a week a team of arboriculturalists from Sevenoaks arrived to make the broken limb ‘safe’.
These guys are clearly skilled at their job.  They explained their intention to leave most of the thicker branches on the ground to create wildlife habitats. Some of the thinner branches were taken to use as path edge markers along the woodchip path adjacent to the dawn redwood tree. Other branches were relocated by volunteers from Friends of  Mayow Park into a locked woodland nature area for wildlife, out of reach of human interference. And the thinner branches were shredded. 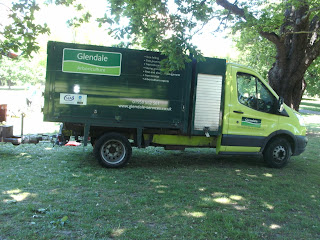 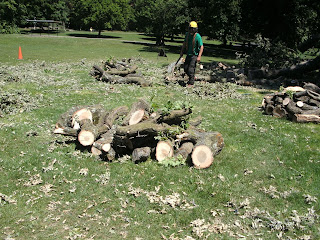 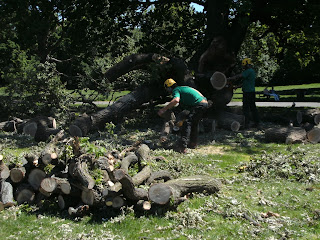 Concerns were raised by park users: maybe this tree is diseased because the heartwood of the broken limb was powdery brown sawdust? 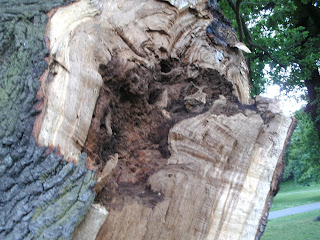 Without scientific knowledge about ancient oaks, I am inclined to the view that the collapsed limb may be due to old age, to the natural hollowing out of the inner trunk and to being a pollard with heavy limbs that lean out from the tree. I hope someone with greater knowledge can come forward to suggest some reasons for this fail. Meanwhile, the exposed inner core can provide a home to solitary bees, beetles and other invertebrates while the tree continues to live.
Looking around at other ancient oaks in Mayow Park, regular park users will recall that in July last year a mature oak split in two and needed urgent surgery. It now stands as a monolith tree where the whole crown was removed. Tree surgeons pruned it to remain standing as a monolith tree, allowing natural decay processes to continue for wildlife. Remarkably, it survives and has started producing new growth with side branches.
Not far from the monolith tree is the ‘lightning tree’. Hit by lightning a few decades ago, it lost most of its crown, thus exposing its hollow interior. It continues to survive, with growth only on one side of the trunk.

These individual ancient trees contribute to the value of the park. Regular visitors recognise them, plants and animals colonise them and they recall land management history as pollarded and boundary oaks.

(Photos by K Andreakou and A Sheridan)
Posted by FOMP at 22:00 No comments: