It was a sunny and warm day on Thursday 30th April 2015. Glendale grounds staff and managers joined Friends of Mayow Park (FOMP) to do some serious work in the Triangle and their efforts are greatly appreciated. Glendale previously helped FOMP in February 2014 and I think we were all relieved that today was a warm and sunny day.

At the start of the session our targets were:
In the bushes behind our black compost bins was a large pile of green waste, mainly twiggy plants that have been removed from the Triangle beds over the past two years and were too woody to go into our bins. Thanks to Glendale, this unsightly pile (and potential fire hazard) has been removed, taken away to be shredded and turned into compost.


Weeding the herb bed is an on-going task as the soil has plenty of bindweed. Volunteers from Friends of Mayow Park concentrated on weeding out as much bindweed as we could. There is plenty more! If anyone passes by with a trowel and sees bindweed strangling the herbs and strawberries, you are welcome to have a go at digging it up and throwing the weeds in the rubbish bins rather than the compost where it is unlikely rot down completely.

Some hard physical work by Glendale saw the removal of the rotting log seating and replacement with new logs. This is a space where small groups of little children can gather  or families can sit to have picnics and relax. Luckily, Glendale staff brought bow saws and strong digging implements to complete this task.
Another major task was to bed in logs along the windy path and to lay more woodchip. This path and log edging were originally installed by Nature's Gym volunteers. Over the past three years or so some logs have disappeared and the path was looking untidy. It is MUCH better now.

The fruit bushes in the Triangle were not forgotten and received a layer of mulch to help them retain moisture during the summer months.

We stopped for a well-deserved break of tea and biscuits and then back to work to finish as much as possible. Much was achieved by ten people working together as part of a team. The photo below shows only eight people as some are camera-shy. 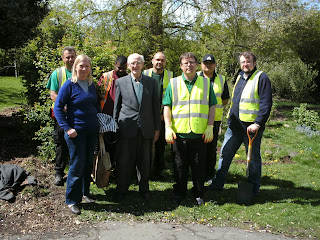 Our park keeper Ainsley joined in and  it was great for him to work with other grounds staff as a park keeper's job can be lonely at times. The Glendale managers also enjoyed doing some heavy physical work working alongside grounds staff.

From the Friends of Mayow Park volunteers, we say thank you to those from Glendale who came to work with us and made an effort to improve the Triangle. It was a session where so much was achieved.  The space looks much better as a result.