A rill in the park 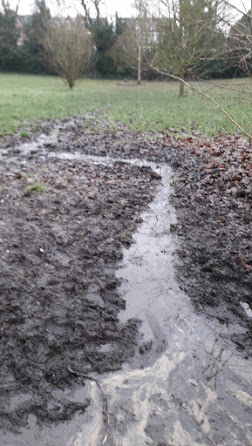 My previous post highlighted the lake in Mayow Park created by weeks of heavy rainfall, a lake that rises or soaks away, very much dependent on the weather. And the post referred to Adams Rill that flowed in past history.

After  heavy rainfall overnight 4th/ 5th February saw the return of a very shallow lake, it seems a new rill has found a route to the lake.

After reading Pippa’s blog about the temporary lake  which arrived in Mayow Park in the last week of January and the fun it brought to park users, people asked how it came to be and why in that location?

Weeks and weeks of heavy rainfall, with occasional drier days; that’s how 2020 ended and 2021 started, continuing right through January. The spongy ground was saturated, unable to absorb more precipitation.  In Mayow Park the paths were muddy, the grass was muddier and some of the drains were mud-hidden, no longer visible or able to do what they were designed to do.

Then the snow arrived, just for one day, but heavy snow. Sunday 24th January. For a few short hours people went into the park, played with the snow,  made snow people; dogs, children and adults enjoyed the novelty. But by the end of the day much of the snow had melted and the rain returned.

Water flowed in rivulets along the paths and down slopes, creating deep puddles in places, towards the shallow river valley to the eastern side, where once a rill* flowed.

Local people may be aware that Mayow Park sits atop very heavy clay which is slow to absorb heavy rain so the water flowed and flowed following downhill routes. It flowed to the lowest level, down into the meadow opposite the cafe and into the scrub area just below Mayow Road. Small lakes have formed here before, lasting a couple of days, but the lake this time was larger than many of the folk round here can remember. It seemed wider and deeper than ever. Dogs had swimming fun. Children came in waterproof boots to have a splashing time.  And Barney brought his paddle board to add to the entertainment – see photo by Pippa in her blog.

The water could not go far.  It slowly soaked away over the next few days. As water receded, the black poplar, which had stood in the middle of the now shrinking lake, gradually moved to drier terrain. The story of the lake was the buzz of local social media. For a few days it brought some joy in these times of social distancing and remote socialising.

With warmer, wetter winters in southern England predicted into the future due to our changing climate, we can expect to see this occasional lake to return when weather conditions are right.

*NOTE: A rill is a shallow brook or stream. The rill (Adamsrill) no longer visibly flows but it seems likely that,  in bygone times, it travelled via Mayow Park through culverts to Bell Green and the River Pool.  Nowadays after heavy rain, it revives in back gardens along Adamsrill Road - named after Mayow Wynell Adams (1809 – 1898). He was the local dignitary who offered the site that is now Mayow Park. (Street names Mayow Road, Wynell Road and Adamsrill Road honour his name).

For more info on Adams’ Rill, here is a blog written by 'Running Past' in February 2018 that is worth reading. https://runner500.wordpress.com/2018/02/14/adams-rill-a-lost-sydenham-stream/

Since the snow melted Mayow Park has been getting a bigger and bigger lake in the dip in the meadow area, not far from the cafe. Dogs and kids have loved having a paddle in it. I’m not sure the poor tree in the middle (a black poplar) is having such a fun time though - hopefully it’ll be OK. Our new lake is a really lovely brown colour surrounded by mud but in a lockdown anything can appear exciting and having such a large amount of water and a paddle board in the shed...well we did start joking about it. 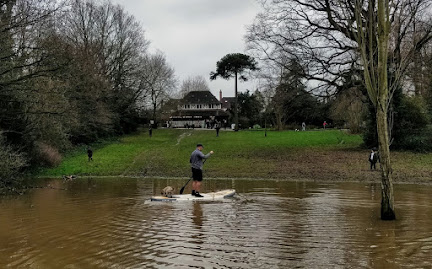 Our relatives in Australia on the morning Zoom call (who have warm weather and turquoise sea at their disposal) were very keen for us to do it. So on my morning dog walk I saw my husband stroll into the park with the big backpack on and couldn’t quite believe he was actually going to do it.

Anyway it’s a great board that you unroll and pump up and it comes on all our seaside trips.

People started wondering what he was up to as he got inflating. Anyway off he went to have a paddle round Mayow lake (with no fin clipped on in case it was too shallow). The dog was very excited and soon was on the board too!

So exactly one week after the snowy snowman Sunday we had paddle-board (or puddle-board?) Sunday. 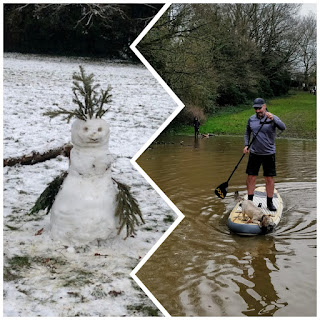 I think it made people smile and we got the video to send to the Australians! Honestly though... a muddy puddle-lake compared to Manly Beach... Oh well, it really is the small pleasures these days. I’m actually pretty good at paddle-boarding but for some reason didn’t feel like showing off my skills. I’ll let the husband take the glory this time (and Scooter). 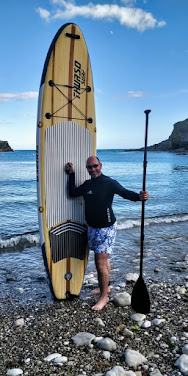