Mayow Park gets spruced up

Over the last few weeks, in anticipation of spring weather, some  grounds maintenance and improvements have taken place in Mayow Park, with positive comments  from park users. The surface under the tennis table was so bad that people stopped playing.
The ground was uneven and very muddy after rain. Glendale was informed and within a few days the surface under the table had been renewed.
The children's playground has had ongoing problems withe muddy ground under the 'mushrooms' and circus for sometime. This bit of the playground is very well used, the ground gets compacted and  clay subsoil makes the problem worse.
The photos above show how muddy the ground became. The Friends of Mayow Park had a walk around the park with a Glendale manager a few weeks ago and raised concerns from parents about the state of this part of the playground. Glendale discussed with the Friends group what would be the best long-term solution. A possible option was to dig a pit in the area of the mushrooms and circus and fill with bark chips. This has worked successfully under the wooden climbing frame and under the play equipment in the old paddling pool. Glendale agreed to do this work as soon as feasible.
Today, 27th April, the work we had been promised was undertaken and completed.
A team of Glendale grounds maintenance staff came along with a lorry full of bark chips. They dug  the pit, removed the soil to be used elsewhere and filled the pit to a good depth with barks chips. They also renewed the chips under the play equipment in the former paddling pool area.

Glendale informed the Friends group that the following works would be undertaken in the next few weeks:

●     Creation of a small bark pit around the mushrooms in the play area to prevent waterlogging  This was completed on 27th April 2016
●     Repairs to areas of chainlink fencing at the back of the trim trail and towards Thriftwood entrance
●     Replacement of 2 support posts to shelter on edge of cricket field
●     Topping up of play bark to main play area and cable slide.(done)

Grass cutting has also been a problem due to saturated ground. There was some grass mowing a couple of weeks ago but it had to be abandoned. It  was more successful today but some areas have had to remain unmown as the ground is still too damp. Despite this the park is looking at its best at the moment.

In total we had twelve adult volunteers and two toddlers taking part in our 2-hour session to tidy the Pavilion Triangle beds. The previous session had been over the Christmas holidays so now we wanted to focus on planting strawberries, first early potatoes as well as weeding, mulching the paths and thinning out some of the herbs  the herb bed.
Here is a photo taken by Lumen showing one of our youngest volunteers working alongside two adults. 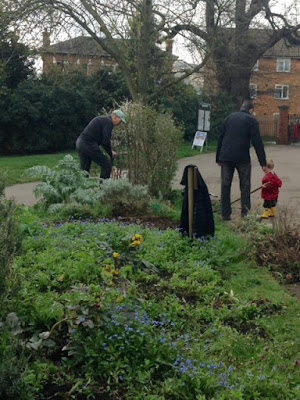 Our new A board can be seen in the background by the Park notice board.
And the photo below taken by Carol shows the A board displaying our event poster poster prepared by Jon. 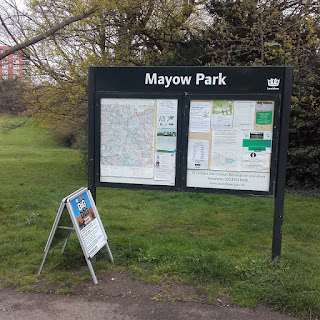 The following photos are taken by Carol and show some of the volunteers at work. Three people joined us who had never volunteered with us before. The park was very busy this morning and a number of people spoke to volunteers about our work. 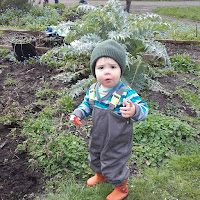 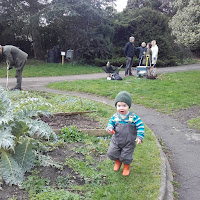 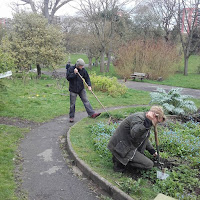 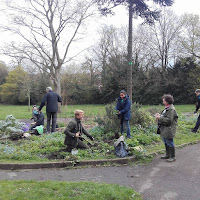 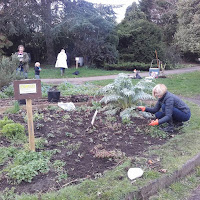 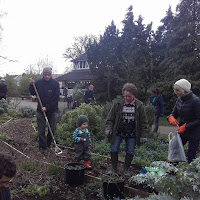 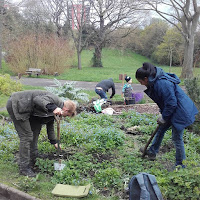 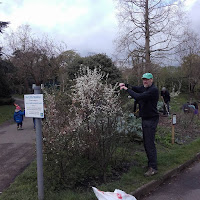 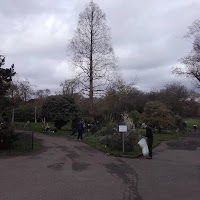 What is missing at the moment is a photo showing the huge amount achieved. A brilliant session and many thanks to all those who joined us. It was fun.
Posted by FOMP at 18:42 No comments:

Friends of Mayow Park organised a gardening session at the Pavilion Triangle beds, not knowing who or what might join us. Two of us had just arrived and were standing by the holly tree when down flew a gold crest. The bird then hovered at the tree ( a bit like a humming bird) and few back into the conifers by our compost bins. Jon had seen the bird and its markings very clearly but was not quick enough to get a photo.
<https://www.rspb.org.uk/discoverandenjoynature/discoverandlearn/birdguide/name/g/goldcrest/>


Over the next two hours people made other discoveries: a centipede and a frog in particular. The following photos are from Carol Robinson (CR) and Lumen Silveira (LS) 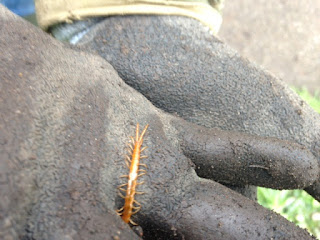 After the gold crest and the frog, would we something else? We found a centipede scuttling out the way  of people busy with weeding and planting.


More photos and a summary of our Big Dig will be in  the next blog.

Turning a fallen tree into seating

If you stroll through Mayow Park, along the northern path near the older children's play area, you will find two logs that were originally park trees. One has been in place as seating for some months, but now there is a new one. A tree which fell due to Storm Katie has now become an additional seating space or a play space for little children.
And the photo below clearly shows what a sorry state it was in:
But careful surgery has turned the broken tree into this log:


Glendale teams manage the park on behalf of Lewisham. They acted swiftly when they were made aware of the fallen tree. There is another log nearby, just visible in the top left hand of this photo.

I had a communication from Glendale about the sports and fitness questionnaire which has been going since early February. The survey is finishing this coming Sunday 16th April 2016. Anyone who intended to fill in a questionnaire and has not done so, there are a few days to go so don't delay.
What happens next?

There's always something to do in the Triangle beds in Mayow Park and more so now that spring has arrived. The hedgerow on one side of the Triangle has blackthorn in blossom, as does the plum tree sheltered by the hedge. The daffodils planted in December have come up and are flowerinf.

Our next event at the Triangle will be a gardening session on Saturday 16th April as part of the Big Dig, a nationwide project aiming to get more people involved in community food growing
The Big Dig is a project of Sustain: the alliance for better food and farming. http://www.sustainweb.org/ 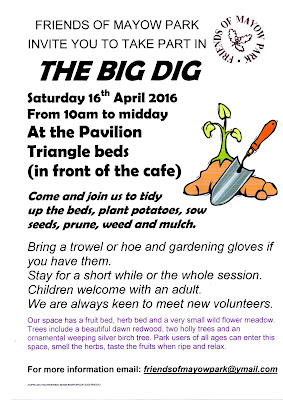 Friends of Mayow Park are looking for volunteers to help us on the day, between 10am and midday.
Come for a short while of help for the whole two-hour session. We have very few tools so if you can bring a trowel or a hoe plus your own gardening gloves, that would be a great help.

We plan to plant potatoes, sow wild flower seeds, weed, mulch and prune as well as planting new strawberry plants donated by Iris at Grow Mayow.
Grow Mayow will also be participating in the Big Dig.
If there are enough volunteers and enough time we can also do some weeding and mulching in the orchard.
If you can help, please let us know either by posting on our Facebook group or by email to friendsofmayowpark@ymail.com

The planned bat walk on Saturday 2nd April 2016 generated a great deal of interest in emails to Friends of Mayow Park and to our Facebook group. Saturday was a mild day, sunny and relatively warm.
Although the weather forecasters predicted rain starting after 7.30 pm it felt as if they were likely to be wrong. . . Unfortunately the forecast was correct.

Fifty people, some with umbrellas, met in the park at 7.45 pm, including twelve children. Dr Iain Boulton, who was leading the walk, gave a brief introduction about bats and about using the bat detectors. He reminded us to use the detectors in a way similar to a torch, pointing at the trees rather than vertically up into the air. Iain gave out the detectors, one per group of people, and we moved off.

We walked through the park, along the path on the southern side, near the Bishopsthorpe Road houses. With plenty of bushes and trees along that path, if the bats were out that would be the place we might pick up their sound on the detectors.

At the holm oak tree, near Recreation Road, we stopped and waited, then returned slowly towards the cafe. Some people walked into the meadow where tall shrubs and trees create a boundary with Mayow Road. Sadly no bats there either, although one young person was certain he spotted one bat.

It had been a great turnout of people and many enjoyed being able to stroll through the park after dark. One boy and his mother went looking at trees in the bushes and found a large toad, which was a thrilling discovery and one which he would remember for a long time.
All the bat detectors were returned and Iain offered to lead another walk, this time in September.  So look out for publicity nearer the time.
Posted by FOMP at 17:46 No comments: