Pollard oak gets a trim

There is a large pollarded oak tree between the tennis courts and the bowls green.
On Tuesday 10th January it had some special visitors. A Glendale arboricultural team from Waltham Forest came to tend to some of its dead and damaged limbs high up in places where normally birds and squirrels go. They were also reducing the height of the crown
Suitably harnessed, two of the guys climbed right up to the top.
For anyone who likes tree climbing, what a great activity. Watching them was exciting.
First they surveyed the tree:
Then two of them climbed up. They looked like giant wood peckers silhouetted against the sky. 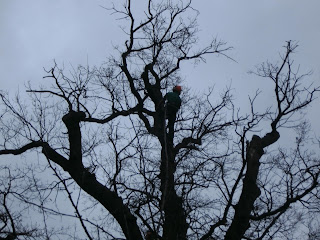 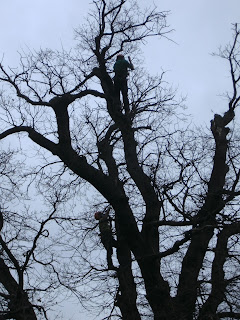 Meanwhile the guys on the ground were watchful to see that members of the public kept their distance and to ensure their colleagues high above were safe. Most of the pruned timber was shredded.
Such skilled work by the arboricultural team.
Hopefully this ancient oak will thrive for a good few more years.
Posted by FOMP at 17:02 No comments:

It is now early January 2017. Mountains of Christmas trees are being brought to Mayow Park to be shredded. It is great to see in the post-Christmas period that so many people are bringing them to the recycling areas in the park. Glendale workers have been busy chipping them and, despite the noise of the shredding machine, their efforts have been much appreciated.

But the shredding machine is driven by diesel fuel. With concern growing about diesel emissions being bad for human health, is it time to rethink and modify this tradition?

This relatively modern, supposedly Christian, festive tradition may have originated in Germany. Although it became a ‘Christian’ tradition it has nothing to do with Christianity; trees brought into the home and decorated during the midwinter can be traced to pagan traditions.

What about environmental questions relating to real versus artificial trees: Do real Christmas trees, grown on plantations, cut down, transported, put on display in our homes and in public spaces, then taken away for shredding using fossil-fuelled machinery, have a smaller environmental impact than artificial trees which are brought out of storage every year for two decades or more?

Artificial Christmas trees are usually made from PVC (polyvinyl chloride), which is a plastic derived from petrol. It is non-renewable. It is not recyclable. It gives off toxins including dioxins which are hazardous to human health. Is it true that you need to reuse the tree for twenty years before its environmental impact becomes less than a cut previously-living tree?

The least environmentally damaging tree solution could be a conifer or another type of tree growing in a suitable pot outdoors which can be brought into the house every December and returned to the outdoors immediately after Christmas.
Any thoughts?
Posted by FOMP at 16:13 No comments: