Photos taken by John Roussety, one of our dog walkers, in June2015 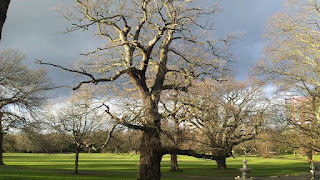 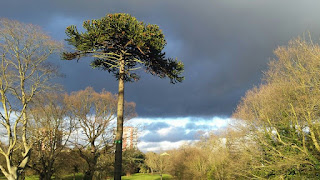 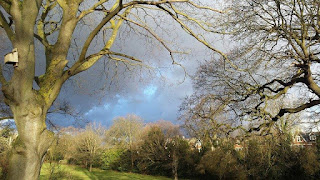 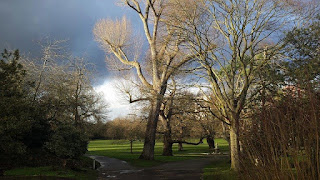 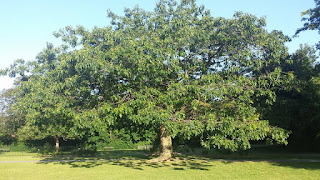 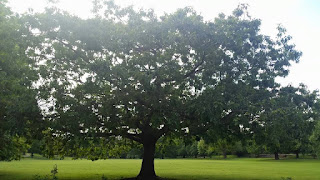 Weather is an important consideration when gardening and the forecast promised some heavy rain. When we arrived there was a light drizzle which soon stopped and the rain held off throughout our session. If we include baby Daniel, there were 9 volunteers.
Our aim today was :
- to cut down some more of the fence guards round the orchard trees, to allow  branches to spread out
- to remove weeds inside the fencing and a circular space around the outside of the fencing
- to check for pests and diseases in the apples, pears and plums
- do some light pruning of the apples and pears to allow light and air into the middle of the trees
- to do a bit of formative pruning of the plums
- to add a thick layer of mulch round the outside of the fence guards, to retain moisture and help the tree roots
Mike and Jon cut down some of the fence guards. Jon was helped by family members:
Others concentrated on weeding and mulching or on pruning.


At the end of the session we had completed all the tasks we had set out to do . . . and then it started to rain. The orchard is looking cared for. The fruit on the trees will have a better chance of growing to a reasonable size and we might be able to think about an autumn celebration!

Fifteen people from Nature's Gym came to work alongside friends of Mayow Park to tidy up the Triangle beds. Although it was a very hot day everyone worked hard. The herb bed was the major focus:
-bindweed had wound round most of the plants,
-the alpine strawberries needed thinning,
-the tall cardoon had lower leaves that needed removing
- mint had spread onto the woodchip path
-the bed edge had 'disappeared' under plants
- the wild roses needed to be tamed
A sign made by one of the park users a few months ago was discovered under the overgrowth:

And poppies sown by another park user could be appreciated as they were coming in to flower:

The fruit bed was a bit of a jungle and grass was removed from around the base of raspberries and currants, the apple tree and the plum tree to give them space. The raspberries were thinned as they were rather squashed together and we look forward to tasting this year's crop.


If you visit now, the apple tree should be much more visible.
The bug hotel in the woods towards the orchard got a bit of attention as two more pallets were added to provide plenty of hiding places for the local invertebrates.
Rita, the park keeper, joined us for a short while after she had been round the park emptying bins and collecting litter. She cleared the thistles and stinging nettles in the mini wild flower meadow. The daisies and nigella in that space are now in flower and were planted there by another of our regular park users.

We are looking for park users who would be willing to volunteer some of their time once a month to help maintain the Triangle. No gardening knowledge is needed as this work would take place on workdays and a few of us could show you what to do. If you or someone you know is interested in helping, do send us an email.

I generally like to post positive comments on this blog but one thing regularly bothers me. Our volunteers give their time willingly and we would like to feel we have support from other park users.  Yet our volunteers  have to keep replacing the path edging logs in the Triangle.
Over the past few years Nature's Gym volunteers have helped the Friends of Mayow Park  to maintain the Triangle beds.  These are the fruit bed near the dawn redwood tree and the herb bed nearer to the cafe. We are always pleased to have help from Nature's Gym and their efforts make a lot of difference.

One task they do  each time is to bed the wood chip path edge logs between the dawn redwood and the fruit bed. As one person recently said, "It stops the path looking frayed."  They do this because the logs are pulled up by others and not re-bedded.

As well as the path edging logs,  the stepping logs in the fruit bed were originally placed so  people could step through the fruit bed without trampling on  plants and I have watched children having great fun jumping from one log to another. But some of these stepping logs have frequently been turned over to hunt for little creatures and have now deteriorated.  If you look carefully, you will see some of these log remains.

The sitting logs by the mini meadow also deteriorated and crumbled over time made worse by efforts to lift them out of their posts.

So, path edge logs, stepping logs and sitting logs, three sets of logs within the Triangle, were placed for different purposes and all suffered.  While I am sure people mean no harm, they clearly do not think that they are undoing work that volunteers have done. We have had to bed in logs ever more frequently, which is very disappointing for the volunteers who worked so hard. I think the time has come to raise awareness among park users and to ask them to leave these logs, not to move them.
Another rather unfortunate consequence of the log-lifting is damage to the habitat of invertebrates such as stag beetles. I will explain:
At the end of April, Glendale staff helped the Friends by bringing  more  path edging logs and sitting logs. They worked hard to bed in the path edge logs. It really did look good! While digging, they found two older, rotting logs. One had  at least a dozen stag beetle larvae. So these logs were carefully replaced and extra earth placed over them to make them less conspicuous.

Glendale also replaced the sitting logs by the mini meadow. Some of the old logs had rotted so were useless for sitting on. Their hard work was very much valued by us.

During the half term break, some people lifted and turned many of the new path edge logs, as well as the two rotting logs with the larvae. I found the two logs turned upwards, with only a slug and a woodlouse in one of them (see photo) where a few weeks earlier they had been occupied by the beetle larvae.
These larvae were not ready to pupate when we discovered them at the end of April. I wonder whether eager young scientists discovered the creatures, did not know what they were and took them away.
It is now June, a time when the larvae pupate and turn into full-sized stag beetles, so I am disappointed at their disappearance.
I would ask all park users and in particular the parents, children and teachers who use the park to consider that the logs have been put there by volunteer labour and that they serve as habitats that we should not disturb. There are other logs near the drinking fountain on the grass area of the Triangle which are not bedded in and can be moved at any time.
Posted by FOMP at 22:42 No comments: