A garden looks well maintained when it has a clear boundary between plant bed and paths. There are all sorts of suitable edging materials including a rustic  look using lengths of logs or the more formal look using floor boards or brick edges. Friends of Mayow Park look after a herb bed we call The Triangle near the cafe and the old timber path edging is mostly rotted now.
This morning Mike and Alona used recycled floor boards to replace some of the rotted timber. We were happy with the outcome but could do with more boards to complete the task another time. 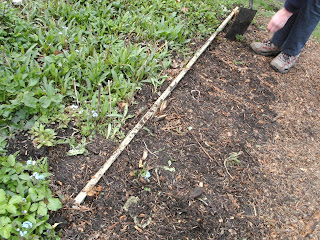 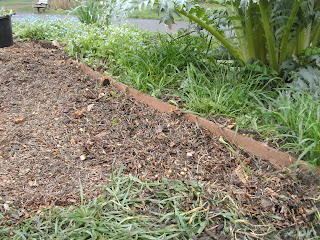 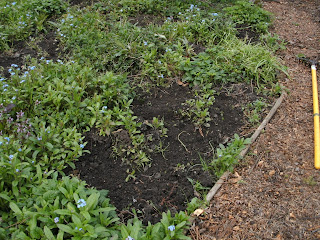 We also sowed seeds: lupins, sweet peas and nasturtiums.  These, if they grow, will add colour when the forget-me-not and self-heal have finished flowering. 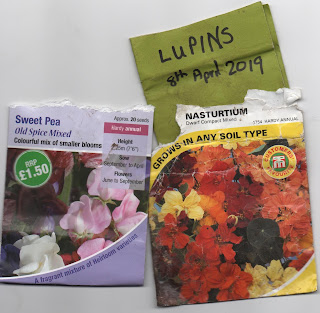 FLOWERS in the Triangle bed

Photos taken today of the flowering plants in the Triangle bed, a space looked after by Friends of Mayow Park.
Rosemary
Self-heal (Prunella vulgaris)
Forget-me-not (Myosotis) 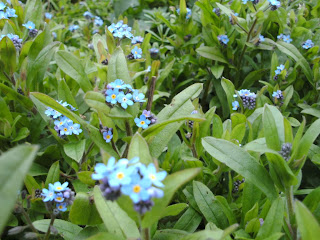 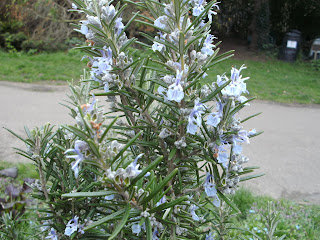 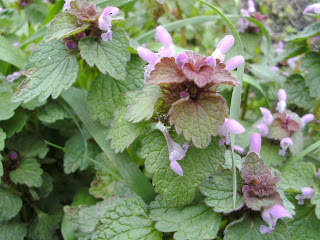 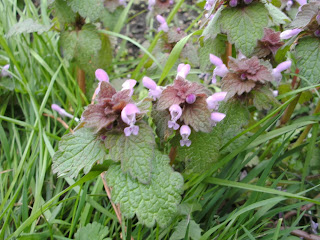 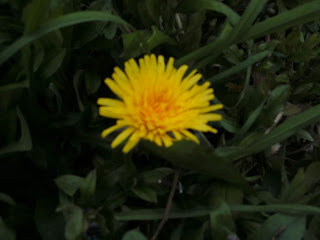 GARDENING IN THE TRIANGLE

By Pippa.
The triangle herb bed needs caring for as it has a prime spot near the cafe entrance to the park and if you are sat having a coffee outside the cafe you certainly will be looking at it and now hopefully admiring it. Full of Forget-me-nots (Myosotis) it is looking rather colourful now.

Look out for another attractive flower at the moment, common self-heal (Prunella vulgaris). Though its soft pink/ purple colour is muted compared to Forget-me-not, it plays an important role in attracting pollinator insects. Watch carefully and see bees flying to the flowers.

The dead brown stalks are gone and the herbs will be on their way up shortly. The rosemary is doing well and I saw the cafe staff taking snips today which is great - fresh herbs for their lovely food menu. This work is down to a few FOMP members but anyone can join our 'gardening club'.

It's very rewarding to transform an area like this in a short time. 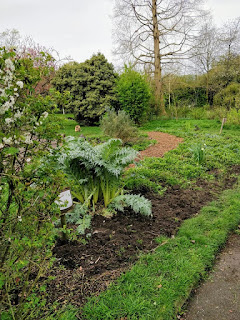 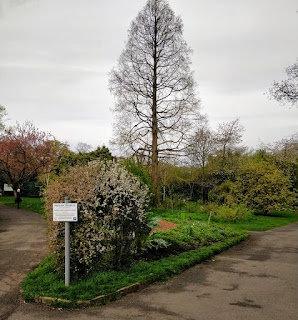 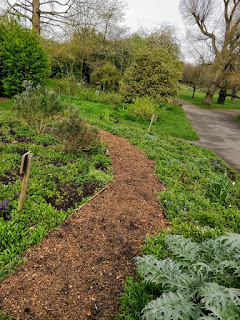 28th March 2019 and our planned Spring Clean in Mayow Park arrived. We were taking part in the annual one-month-long national campaign organised by the charity Keep Britain Tidy.   https://www.keepbritaintidy.org/ 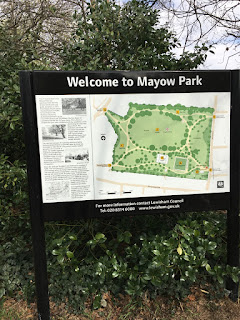 This community-led event aims to clean up litter from our streets, parks and beaches. In particular, we are all aware of the huge amount of publicity about single-use plastic, how it harms wildlife and makes an area feel unloved. For our event, our focus was only on Mayow Park.
Today’s event included our local Safer Neighbourhood team of police,  our park keeper and one of his colleagues, five pupils from year three of Our Lady and St Philip Neri primary school with their class teacher Mrs Moss as well as FOMP (Friends of Mayow Park) volunteers and a very well-behaved dog. The children met the police and held their litter picking sticks high to show they were keen to get to work.
Our park-keeper spends just two days a week in our park but in those two days he can’t go into all the wooded areas of the park to clear up tiny pieces of plastic and dumped items. Today’s event was also aimed at helping him.
Armed with our litter picks and big bin bags we all headed off .
The wooded space parallel to Mayow Road was full of rubbish including empty fast food containers, bottles, cans and general rubbish. Some of the spring-clean team stayed there for most of the morning, removing as much as they could.
Others went into wooded areas around the park perimeter and along the meadow.

The children and their teacher did their pick-up mainly in the open spaces, which at first glance appeared relatively litter-free. Yet they managed to fill TWO large bin bags with rubbish. The children commented on how many Haribo sweet wrappers and empty packets they found. They had to leave us after roughly 45 minutes and return to school. Their help was invaluable.
When we all gathered together at the end of the clean-up we were surprised to see we had filled 15 bin bags with rubbish but we had not been able to recycle anything as most recyclables were ‘contaminated’,  meaning too dirty to put into recycling bins. The police, with their equipment, had also found two large knives which had been discarded in the woodland running alongside Mayow Road.

Thank you to everyone who joined in today. The general feeling was that we had achieved much, collected a lot of rubbish and helped to clean up our much-loved park. At the same time it raised the question of why some people seem to feel it is OK to drop litter.
We are aiming to take part in the National Spring Clean again next year.
Posted by FOMP at 22:25 No comments:

27th March 2019 was a cool spring day, but a good day for sowing seeds. Twenty two children from a Reception class at a Sydenham primary school came with their teacher and their teaching assistant to Friends of Mayow Park and help us sow wild flower seeds in the mini meadow. The aim is to transform this semi-circular space into a colourful, pollinator-attracting wild flower display this summer and future years.
Wildflower seeds don’t like competition from grass so the children scratched the soil and pushed grasses aside which also helped to rake the soil to a crumbly texture.
The seed packs were opened so the children could see differing colours and shapes.  Colours ranged from light brown to dark brown, to black and grey. Some seeds were very small while others were larger and easier to pick out. They varied in shape too, some being round, others more oval.


Mixing the seeds with sand meant it was easier to see where they would be scattered. In pairs, the children took small handfuls of the sand/ seed mix and scattered their seeds in their chosen sowing spot.
Watering the seeds was the final step.
This activity ended and the children returned to school. Well done all of you.
It is so important for children to learn about the right conditions for plants to grow and practical activities such as this, in outdoor spaces, help them to understand in context.  The Friends of Mayow Park hope the children will visit through the spring and summer to see if their sowing efforts have been successful.
Over the coming weeks the seeds will be watered every evening by a volunteer unless there is rain.  With the right conditions, not too much rain, not too much drying heat from the sun, we should see the first shoots emerge by mid-April.
Posted by FOMP at 21:00 No comments: