As always when working out of doors, we hope for dry weather. The forecast though was a bit uncertain and there had been rain earlier in the morning. How lucky we were that by 10a.m the rain had passed  and we were soon working hard.
This session saw Glendale managers and Friends of Mayow Park working to tidy up the fruit bed  and the mini wildflower area in the Triangle.
The first task was to remove the stepping logs in the fruit bed. Many logs had been covered by couch grass and those that were still visible were rotting and slippery. In a very short time they had all been moved to create an invertebrate habitat in a corner by the hedgerow. A robin came to join us with the promise of a feast and a frog or two hopped away as we disturbed their hiding place.  Chris wheeled barrow-loads of woodchip to fill the small craters where the logs had been.
The sitting logs near the holly tree and hedgerow needed some remedial work. Some logs had rotted. This was not a problem and in no time the Glendale team had it sorted.
The wild flower meadow was taken on by Sandra who cut down all plant matter from the site. Just as well she is not too squeamish as there were slugs and a frog hidden in  the vegetation.

Sue and Dave worked on the raspberry patch, pruning most of the canes and digging up some to allow more light in.

Here are some more photos showing the sitting logs, the team and the large pile of garden waste that was generated. All the garden waste will be taken to a depot for shredding and turning into compost.
Mike was skillfully pruning the wild rose bushes at the apex of the Triangle, at the herb bed closest to the cafe, and very visible to people entering the park. The roses are now full of delicious-looking rose hips for the wild animals  so care was needed not to lop them all off. Mike also pruned the hedgerow along one side of the fruit bed and it looks much better now.
It was great to have the Glendale team  to help us as the fruit bed had become rather overgrown. While the team were in the park they also chopped some brambles in the bushes as these were beginning to spread onto the path and they also tidied up the tree pits around the row silver birch trees in front of the bowls cabins. The Friends of Mayow Park will organise another volunteer workday next month.
Posted by FOMP at 21:45 No comments:

GARDENING WITH GLENDALE in October

Friends of Mayow Park will have a gardening session with some of the Glendale staff on Thursday 13th October 2016. Meet near the cafe from 10am to 1pm.
Stay for the whole session or for a little while.
We have some tools but if you have a trowel or spade for your own use, please bring them.
We don't have any gardening gloves so please bring if you have them.
We intend to tidy up the plant bed where the raspberries are.
We will thin the raspberries and prune them for the winter.
We will create more space in the middle of the area to allow the grass to be cut regularly.
The plum tree and the apple tree will remain and we will mulch around them.
The mini wildflower meadow will be cut for the winter.
Refreshments - biscuits and squash.
For more information contact <friendsofmayowpark@ymail.com> 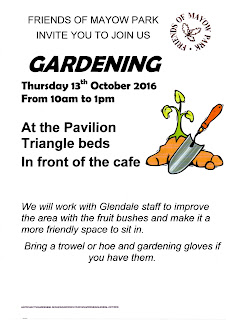