A story of a gate pillar

Have you  ever looked at the gate pillars in Mayow Park? There are four entrance gateways to the park but only three with brick pillars.  Some are a piece of Victorian history. But some pillars are replacements.
Here are pictures of the gate pillars near the cafe. One of the pillars had to be replaced  around 2013 when  major work was being carried out the the pavilion building which now houses the cafe. The second pillar is older.

Take a look at the gateway at the Silverdale entrance. One of the two pillars there looks older than the other. Does anyone know the history?

There is one entrance with a difference: the park gates opposite De Frene Road. The gates here are attached to a metal post. Does anyone know why there is no brick pillar here? If you do, please share this information.

If you walk to the south-west corner of the park and to the gate pillars at the entrance to Recreation Road you will see that this pair of pillars look slightly wider than at the other two gates. You will see that the pillar on the left (when viewed from within the park) has suffered with time and the elements, its red brickwork crumbling like chalk dust through weathering. Look at the other pillar and you would be correct in assuming it has been repaired and not for the first time.
The most recent repair has just been completed. The damage to this pillar happened on 22nd July 2016 when a grounds maintenance tractor towing grass mowing blades on a trailer hit the pillar. The vehicle was on its way to mow the grass in the oval sports area but it did not complete its mission on this particular day.
As far as we know, from eye witness accounts, while entering the park the tractor driver had to swerve suddenly to avoid a dog running across his path. As a result the towing unit caught one of the pillars and caused sufficient damage to make the whole structure unsafe. Thanks to one of the Friends of Mayow Park Facebook group who posted this photo minutes after the accident.
Luckily the dog was safe and no-one was hurt.  The gate itself was rescued as was the capstone and much of the pillar was removed to avoid danger to the public.
Managers from Glendale (the company that manages most of the parks in the borough on behalf of Lewisham) ensured that Heras fencing was installed so that the entrance can be locked in the evenings. 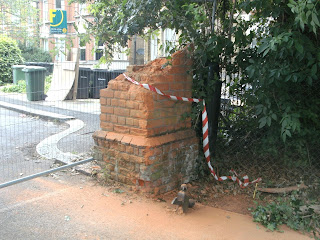 Communications between Glendale managers and Friends of Mayow Park followed. We were assured that efforts would be made to seek out the same type of red Victorian bricks or something similar. Progress was made, a source of these bricks was found and it looked like the pillar would be repaired before the end of 2016.
The repair was delayed for  sensible reasons;  major renovation works were about to take place to the tennis courts.  These tennis courts were rather dilapidated with a very poor ground surface. Renovation would mean heavy vehicles carrying building machinery and materials going in and out of the park from the Recreation Road gate. It made sense to delay repairs until building works to the tennis courts were completed.
And so it was that the rebuild of the pillar was put on hold until April 2017. 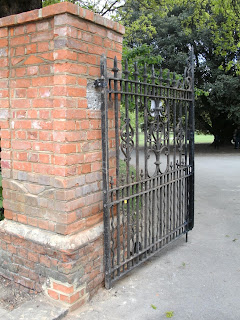 At the time of writing, the pillar is almost finished and the gate has been reinstalled. All that is left to complete the work is to top the pillar with the capstone, which has been carefully stored at another park for the duration. 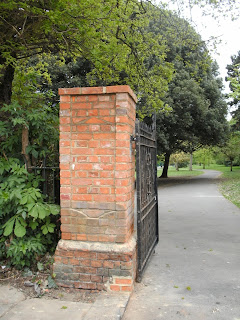 The capstone is extremely heavy and needs a suitable vehicle with lifting gear so we had to wait for the final photo. 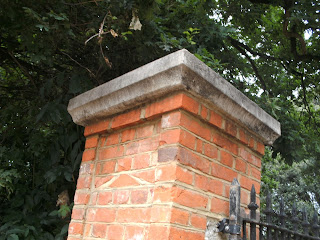 The gate looks lovely again. Well done to Glendale for sourcing suitable bricks and to the maintenance crew who took such care in rebuilding it.
Posted by FOMP at 22:05 No comments: