Litter is not exactly an exciting topic but it bothers people when it is scattered where they want to be. The early May Bank Holiday weekend (Saturday 5th - Mon 7th May) is over and, unusually, we had a hot weekend. It was lovely to see so many people out in parks across London, but the littering masses were out in force too.
Not only Mayow Park but so many other parks suffered from the worst litter problems I have seen so early in the year.
There seem to be two types of litter generators:
1. Those that leave all their litter at the location where they gathered.
2. Those that thoughtfully collect all their rubbish, put it into bags and leave it all beside a park bin that is already too full to take even a crisp packet.
The people in first category are, in my view, anti-social, caring only about having fun and never mind about spoiling the environment for others.
The people in the second category are socially aware and show they care but are at the same time unaware that their left-overs will provide a free meal to park wildlife who will scatter the pizza remains, hummus dips, plastic bottles, glass bottles, drinks cans and all sorts of remains so that the area round the bins looks unpleasant.
People do not realise the problem unless they see the aftermath, the mess,  on the following day.
One solution could be to encourage people to take all their own rubbish home so that recyclable items and waste can be sorted and disposed of according to their local authority requirements.
This would need publicity via adverts on television, on buses, on billboards and anywhere else where people would see and take note.
This would cost - designing posters, making videos, pay for advertising space, publicise on social media.
But it is a national problem. So publicity should be national.
BBC Essex produced  a video of Southend beach after the bank holiday weekend
http://www.bbc.co.uk/news/av/uk-england-essex-44046903/southend-beachgoers-leave-behind-piles-of-rubbish

Back at Mayow Park, on 8th May, three individuals simultaneously went to the park determined to clear up as much as they could. They met up which was a delight, positive encouragement. And a conversation has started on how to reach out to schools so that the pupils will become more aware of the issues and solutions.

Last year saw a break from cricket in Mayow Park. But the good news it is returning with a new home team, the R.A.S.R.A. Eagles cricket Club. For those keen on cricket, here is the fixtures list: 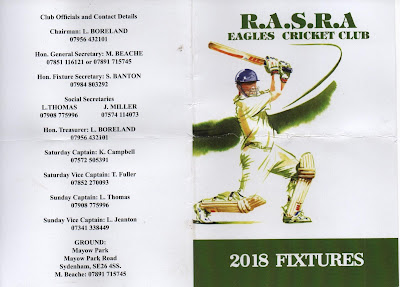 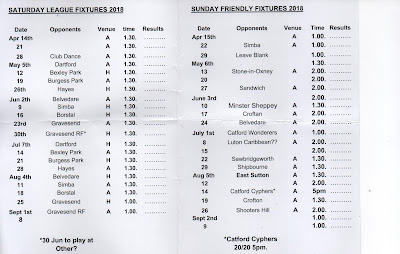 Many locals who have lived in Sydenham for a while will remember Dr Graver with fondness (also known as Mrs Hilary Jarrett). She was highly respected in the community.
She was a very active Friend of Mayow Park. She had been treasurer and Chair of the group, a great advocate of the park in the local community and with Lewisham Council.
Among her MANY achievements she
- helped to start our annual Tree Dressing tradition (held on the first weekend in December),
- was involved in planting a larch and a gingko tree,
-  organised the 125 year celebrations for Mayow Park with her husband John and other volunteers,
- worked tirelessly to get a modern drinking water fountain installed,
- helped to create the fruit and herb triangle beds in front of the cafe,
- contributed a tree to the orchard: Lane's Prince Albert cooking apple.

Hilary died in 2016 and has been very much missed by the Friends group.
Her family planted a commemorative tree on 4th May 2018 and installed a plaque in her memory. The tree, a larch, is located between the orchard and the Recreation Road entrance.
Many thanks to Lewisham Greenscene and to Glendale for supporting this planting and agreeing the location for this tree.
I would like to thank her family for this lovely addition to the park. 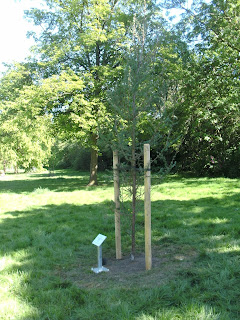 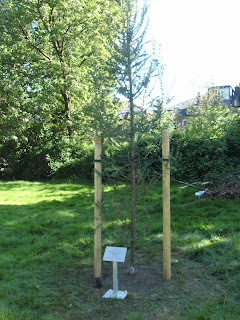 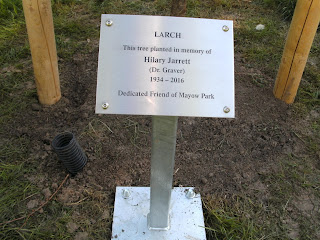 Work sessions in the Mayow Park orchard have not happened for a while, not since February when we held our winter pruning day. There have been too many days of heavy rain since then; no motivation for Friends of Mayow Park volunteers to get out and do  essential work in the orchard. But polling day promised to be sunny and perhaps even warm so we hastily arranged a work session.
At 10.30 am the first volunteers arrived. We intended to remove weeds round all 18 or our orchard trees, check tree health,  put down some mulch, check the guards and low metal fences round the trees. we were not sure we could do all that in  two hours.
Much of our small pile of mulch had been removed a few days earlier but one determined volunteer was able to sweep what remained into the wheelbarrow and all the trees got some mulch.

COMFREY FOR FRUIT TREES: Some of our trees have comfrey plants growing round them in their tree pits. These plants were intentionally planted a couple of years ago. The thinking is that comfrey, which has deep roots, will bring up nutrients into its leaves. We then cut down the leaves and chop them into the mulch so that the nutrients can feed the tree roots. Some comfrey can be very invasive, but the variety we have, Bocking 14, is non-invasive. If visitors see these large, fluffy-leaved plants they should not be concerned.
VOLUNTEERS: In addition to our regular volunteers, a dad and his two sons joined us. Their help was much appreciated. Another volunteer came along later and also made a huge difference to the amount we achieved. A total of eight volunteers. We had not publicised this session so we were delighted to have these extra pairs of hands.
At the end of two hours, we had completed all the tasks.

The orchard is looking lovely with some of the trees in blossom as seen in this photo below:
The orchard is once again full of Lady's Smock flowers (also known as Cuckoo Flower). These are delicate-looking flowers and rather uncommon in the borough of Lewisham. They prefer damp grassland and our orchard, being on very heavy clay, certainly fits that description. So, by arrangement with Lewisham Greenscene and the park contractors Glendale, the mowing of this area will be delayed until the plants have finished flowering and set seed.

A few parents with young children were interested in sowing wild flowers in the wild flower area that Friends of Mayow Park look after, beside the Triangle fruit bed. So we arranged to meet up to give the  youngsters the opportunity of sowing some seed balls  (a small ball-shaped mix of clay, compost and seeds) followed by loose seeds.
The seed balls had been purchased through a crowdfunding campaign by London National Park City, aiming to bring appropriate colourful wild flowers into public spaces.
Now comes the waiting game, when we hope there will be enough moisture to allow the seeds to germinate and  wow us with a floral display during the summer

What a terrific turnout to the bat walk with more than 100 people meeting outside the cafe in Mayow Park. Although a cool evening, it was dry and there were some insects flying around, making it more likely we would see bats.
After a reminder of health and safety in the park  at dusk, it was the turn of Dr Boulton to talk bats.  Dr Boulton introduced himself, gave some general information about the bats we might see and explained how to use the bat detectors.
People organised into groups with one bat detector per group and it was time to set off round the park. Some followed Dr Boulton and others  meandered in other directions. Over the next hour, as the evening grew darker and our eyes became accustomed to low light levels, some found it easier to look for flying bats rather than to use the detectors.
By the end of the walk many people had seen bats flying around although it was noted that most of these nocturnal flying mammals tended to fly closer to the back gardens of nearby Bishopsthorpe Road. One explanation put forward for this was that most trees in the park were not yet in leaf after a very long and cold winter while the back gardens, being more sheltered, had more insect-attracting vegetation.
This was a community event organised by Friends of Mayow Park.
Posted by FOMP at 21:15 No comments: