This article was written by Daniella Levene  from CleanUp UK who gave permission for us to post it.

The community event  was organised by Paulette and Megan  at Lewisham Plus  http://plus-services.org/  and supported by Daniella.

Most of us litter pick because we are concerned about the environment, but group litter picks have so many benefits aside from the environmental one and you don’t even have to litter pick to take part! You could help sign people in, sort equipment, bake a cake, chat to passers-by, organise, design a poster, make some tea, or just walk around for company because you care and want to be sociable. Last Saturday’s pick in Mayow Park (14th September) was a great example of how meaningful they can be.
The PLUS pickers had their first successful pick in the summer in Folkstone Gardens and were keen for more. As Rob Agrawal, Head of Service at PLUS said, “Litter picking is such a rewarding thing to do as everybody is able to participate to some extent and the results are obvious and immediate’.
One participant, Megan, enjoyed it so much and wanted to organise one closer to home. With help from her fabulous support worker Paulette, we met Alona, Chair of the Friends of Mayow Park, who was happy to support but at first wasn’t sure if the park needed a clean. Mayow Park on first appearances is very clean and it is well looked after; it has a park keeper (Ainsley) twice a week, an active Friends’ group, and is clearly loved by its many users.


However, like most well used parks, when you start to really look you will see the gleam of plastic, perhaps a bit of straw wrapper taken by the wind, or a plastic bottle deliberately chucked in a bush (out of sight, out of mind), or the thousands of cigarettes (it is estimated that 4.5 trillion cigarettes butts are littered each year), which most smokers aren’t even aware are harmful.

After our walkabout to check out Mayow Park and see what we could do a date was set. Megan and Paulette contacted their friends, put up posters and with some support from me and Glendale everything was in place for the day, with fingers crossed for sunny skies. Thankfully the weather delivered, and it was beautiful day!

In all 29 people took part, including three wonderful young pickers, as their guardian Jill stated, “They walk through the park on the way to and from school and come every weekend, so it was good to see them having fun while helping the environment and the park they love.” 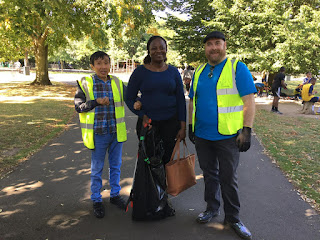 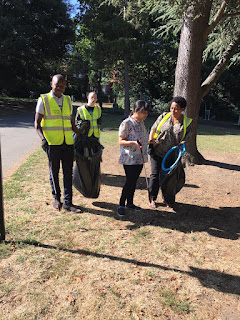 We were also joined by councillors Susan Wise, John Paschoud and Jacq Paschoud and,from NDTi, Madeline Cooper-Ueki who inspired PLUS to get involved after hearing her talk about social inclusivity, as she surmised about the day, “Communities and friendships are built when we come together to do things that matter in our neighbourhoods. All too often people with learning disabilities are seen as recipients of help from those around them. Megan’s role in making this park cleanup such a success captures how the opposite is the case. Communities benefit most when everyone is included!”
A total of 10 bags of rubbish was cleared, not the biggest haul but that's not really the point. Every piece collected is one less harming our environment and wildlife AND OF EQUAL IMPORTANCE, those involved are a little bit more connected. 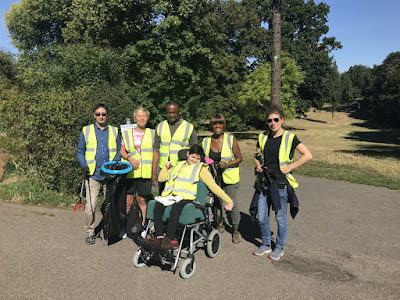 The PLUS pickers are keen to get involved in more community litter picks. If you'd like to join them or organise one, please get in touch. 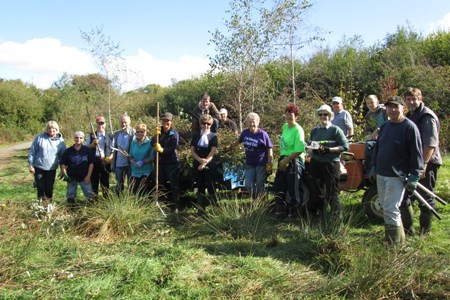 FRIENDS OF GROUPS: Valuing the work of Friends of Parks
This blog post first appeared on the Fields in Trust website 7th July 2019 and was written by David Sharman    http://www.fieldsintrust.org/News/valuing-the-work-of-friends

The photo below from Friends of Mayow Park was not in the original blog.

We all know that time is precious and we all tend to value our own time highly, but when it comes to parks and green spaces it's unfortunately all too easy to overlook the value of other people's time.

David Sharman is Fields in Trust Development Manager for London and the East of England. He can be contacted by any of the below means.
t: 020 7427 2123
e: david.sharman@fieldsintrust.org
Posted by FOMP at 11:34 No comments:

27th September 2019 and the park is moving into autumn. Today was sometimes sunny and warm and sometimes heavy showers. Our park photographer Ron Packham has been out in Mayow Park to see what is stirring. Here are two of his photos.

The squirrels have been very busy during the last couple of weeks. Ron has caught on camera how these animals collect conkers in readiness for winter. They dig holes to bury their horde but often seem to forget where they buried their larder


This lovely photo taken by Ron looks like an autumn painting with its dappled shades of green and brown. The view is looking east towards the tennis courts along the path from Recreation Road.
Posted by FOMP at 20:28 No comments:

The poster below gives an outline of our event on 5th October, starting at 10 am. We'd love to have a few extra volunteers though:

Come along for a fun morning.
Get in touch if you would like to help, by sending an email to friendsofmayowpark@ymail.com.
Posted by FOMP at 20:14 No comments:

We had a truly enjoyable bat walk this evening (20th September).  It was a mild evening with a clear sky. Sunset was around 7.15 pm. Moths and other flying insects were active - a good sign as they are food for bats.

Thanks go to Dr Iain Boulton for once again leading a bat walk in our park. While he was explaining about bats and their behaviour to the gathered crowd, one pipistrelle flew over our heads, right on cue. It flew in a loop and back behind the cafe building, seemingly not bothered by the throng of people.
We walked over to the orchard and our bat detectors started cracking as they picked up the sound of bats. We watched as bats few above us. The joy of the park at twilight was only slightly marred by sounds of the planes flying high overhead.
Thank you to to all the wonderful people who came to spend time in the park after dark, when the park is normally off-limits and locked up. Thanks also to Glendale, who manage the park, for agreeing to extend the opening time.
We had a total of 87 people with 52 adults and 35 children, according to the numbers on the sign-in sheets. One couple even spoke in praise of the children who were there. The children were excited and were running around  but interested and well behaved.  We had great feedback. Friends of Mayow Park are planning more bat walks for 2020
Photos thanks to Freda Darr. 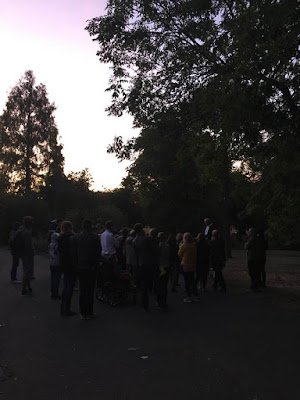 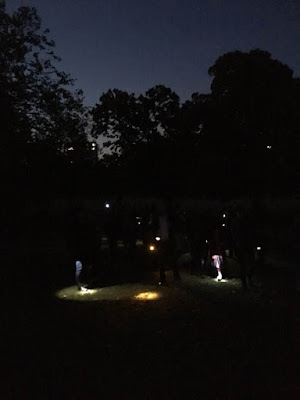 There are three FOMP volunteers who regularly arrange to do some gardening work in specific spaces  within Mayow Park which we are responsible for. This was agreed  with Lewisham Council and Glendale  some years ago but many people who have recently moved into the locality may not be aware of this.

Here is a summary

HERB BED in front of the cafe. It grows a range of herbs, mostly mints but also plenty of oregano which butterflies love, as we saw back in July. It is allowed to grow a little untidily. People are able to collect leaves of rosemary, oregano, mints and other herbs for their own use. Unfortunately that bed also has bindweed which we struggle to keep under control. When we pull it up, it goes into one of the park litter bins rather than our compost bins. This is because our 'dalek' style compost bins do not heat up to a sufficient temperature to destroy the bindweed.
Information on our compost area will follow in another blog.

SOFT FRUIT BED: Just to the west of the herb bed is the bed with raspberries, blackcurrants, red currants and white currants. The fruit is there for passers-by to pick and for children to taste fresh. The two fruit trees in that space are a Victoria Plum which has not produced proper plums for several years. In the past few years it has developed 'Pocket Plum', caused by a fungus. This prevents the development of the stone and causes distorted fruits to appear. There is nothing we can do, but the tree is still healthy and a worthy addition to the space. Near to that is a dwarfing Jonagold apple tree which produced a few apples this year and which were enjoyed by people in the park. Round two sides of the fruit bed is a hedgerow, planted for wildlife.

There are also plants growing beside the balustrade overlooking the bowls green.

MINI WILD FLOWER BED AND STEPPING LOGS
Along the path to the south of the soft fruit bed is a very small wild flower meadow. This year more colourful flowers came up. Next year, do visit and see how many wild flower varieties you can find.

ROCKERY: Near the drinking water fountain that Friends of Mayow Park funded is the revived rockery, which we rebuilt with help from Glendale. It was the wish of the previous Chair of FOMP, Hilary Jarrett,  that the rockery would look be revived. Sadly Hilary died before her wish came true. I'm sure she would be very happy.

MINI NATURE TRAIL: Along the path towards the tennis courts and just past the end of the bowls green to the left, we have created a mini nature trail and invertebrate 'hotel'. Volunteers from Nature's Gym helped to rebuilt the the pallets of the minibeast hotel and to lay logs along the path. During the summer holidays (and presumably with approval of their parents) children removed the path edge logs to build 'dens' in various locations in the park. We hope that we can find enough logs to reinstate the path and that parents will encourage children to respect the work of volunteers.

ORCHARD: We have 17 fruit trees and one bush. A detailed account of the orchard will be prepared ahead of our Apple Day, coming up in early October.

We welcome volunteers to help us with the rockery and the gardening. No experience is necessary as we will show you what to do. Twice a year there is an orchard workshop, led by an experienced orchard volunteer.
Posted by FOMP at 17:28 No comments: 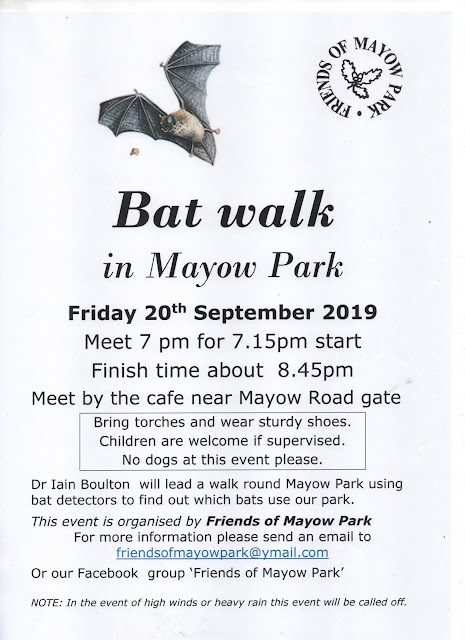