Friends of Mayow Park volunteers gathered for our annual orchard winter pruning and maintenance day. Eight adults and two children came to lend a hand. Our trees are in a public park, where grass mowing it carried out regularly during the summer, where dogs and children run around. The space  is well used. The trees have tree guards around them to offer some protection until they are bigger and stronger.

The trees are dormant now so this is the best time for formative pruning of our apple trees (malus) and pear trees (pyrus) to give them an open shape and encourage flower and fruit growth.

We set to work. First up was a check on the Cox’s Orange Pippin apple to identify fruit buds and leaf buds. We agreed which branches needed removing or having their height reduced, which crossing or crowded branches needed pruning  in order to open out the centre of the tree to allow air and light in.


The Jupiter apple is growing noticeably stronger than the others planted at the same time. Maybe it is in a better location for sunlight, maybe it is better placed for moisture to its roots. It had grown much taller than the other trees - too tall.  Its fruit would be difficult to pick. We agreed to remove one of the main vertical limbs and reduce the height of another before tackling lower branches to give a better shape to the tree.

Trees planted last March (2016) did not need pruning, other than a damaged branch. The height of some of their tree guards was reduced to allow branches to spread.
The site is on heavy clay so the soil tends to dry out and crack during dry summer months. Mulching is important for our trees, helping hold moisture in the soil during the summer as well as making it harder for weeds to take hold. The two children had a great time climbing mountains (the pile of wood chip ready for mulching) and digging with trowels; to some extent they helped their mums remove weeds round a  tree and to put a thick layer of mulch around its circumference.
As always with outdoor activities, the weather can play an important part in the success of the day. We were lucky as it was relatively warm for this time of year (Around 9 or 10 degrees) with sunshine.

We will be having our annual  orchard winter tree pruning and maintenance workshop on Saturday 18th February from 10am until 1pm.
Don't worry if you have very little knowledge of what to do as we will carefully look at trees and decide what pruning we need to do to encourage healthy tree growth and hopefully some summer fruit. We will  be weeding and mulching the ground round the trees too. Trees that were planted last March will be given more space to branch out as we will reduce the height of the protective guards around them.
If you can only stay for part of the session it is best to come at the beginning when we will go through all the work we will do. 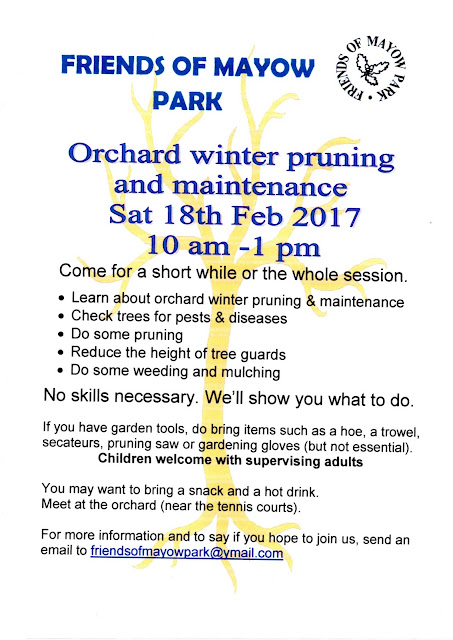 Volunteers from Nature's Gym came to help Friends of Mayow Park (FoMP) on Saturday 4th Feb 2017. The main focus was to lay fresh woodchip mulch on the paths in the Triangle. Some work was also carried out on the fruiting hedgerow at the hard standing and more will be done by FoMP at the next gardening day on 4th March. 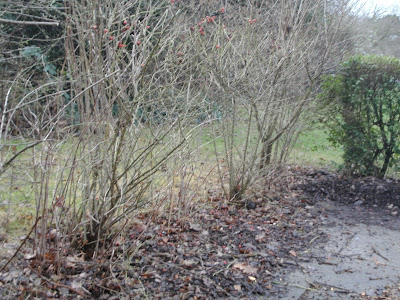 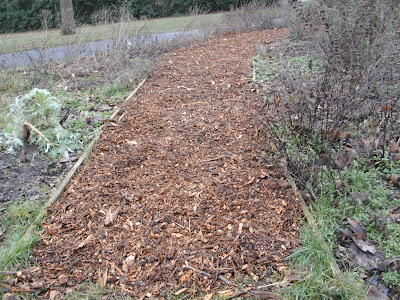 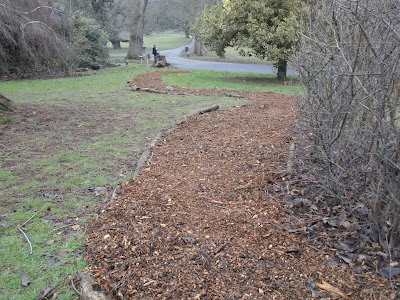 Those of you who regularly use Mayow Park will have noticed that works have commenced to renovate the tennis courts. The old fencing has been removed and the tarmac has been dug up.There is great anticipation among the regular court users at the thought of good quality courts after several years of  balls bouncing in unpredictable directions. Members on Facebook have spoken that they will miss the spontaneity of just turning up to play for free and about being willing to pay a small amount for the joy of playing a decent match.
Here are some photos: 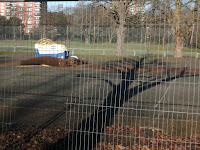 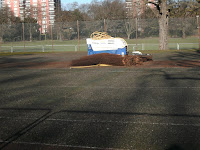 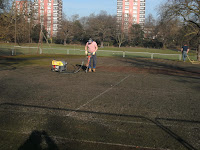 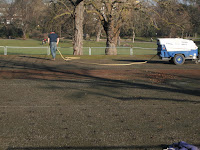 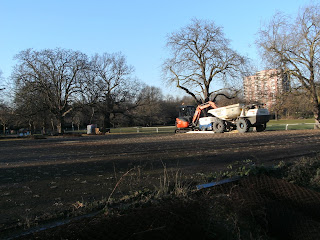 I spoke to one of the  guys working at the site  on 23rd January and he said  the work should be finished during March.
It is good to see that a temporary 'roadway' has been laid to protect some areas of grass from heavy vehicles while work is carried out to the courts as can be seen in the picture below. 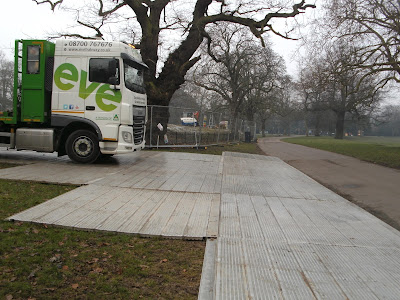