After all the planning and preparing, Apple Day arrived today. It may be mid-October but we had a warm, mild day with temperature in the low 20s, ideal for an outdoor event.
Volunteers arrived in plenty of time to put up the gazebo, set the tables and prepare the apple varieties for tasting. Our story teller, Rich Sylvester, arrived and chose a wonderful lime tree within our orchard area where he set up his story telling den.
The tennis courts beside our orchard were busy too, with parents bringing children for tennis coaching. This was great for us as  parents found out about our event and all could join in either before or after their tennis session.
The orchard sign had been installed on 11th October, in time for the great unveiling today. It has illustrations provided by some pupils from St Michael's Primary School, a local school.  One of the local Perry Vale Ward councillors, Cllr Alan Till,   offered to unveil the sign and he invited a couple of children to help him. One of these two  children saw his illustration in the sign and looked really happy; he had been one of eight children who contributed orchard-related pictures.

Our story teller gathered adults and children and recalled some apple names. He gave out pairs of wooden rhythm sticks so that people could chant and clap out the rhythms - Lane's Prince Albert . . . Cox's Orange Pippin . . . Winter Banana . . . with these wonderful rhythmic beats and chants everyone followed Rich to the story den. Try it yourself - it sounds rather soothing.
Meanwhile, back at the gazebo, many people came to learn and wonder at unusual apple names that they had never heard of. They had the chance to do a taste test and decide which variety they preferred.
The apples we brought were cut into small pieces so that as many people as possible could taste them. Some varieties had been purchased from Brogdale, on the edge of  Faversham in Kent. As it happens, Brogdale is  holding a national Apple Festival this weekend! get along there if you can.
If you don't know of Brogdale they grow over 2000 varieties of apple as well as other fruit. Their fruit is not grown commercially but groups like friends of Mayow Park and other organisations can order small numbers of heritage fruit for events such as our Apple Day. We ordered four varieties from Brogdale and more varieties were harvested from local gardens or bought from our local greengrocer.It was a joy to see so many children who LOVE eating apples and who wanted to taste as many apples as they could. Could it happen that they may grow up wanting to grow their own fruit? will they be our future Mayow Park orchard carers? It seemed that Zonga, a fairly new variety grown in Kent and bought from our local greengrocer, was the most popular. 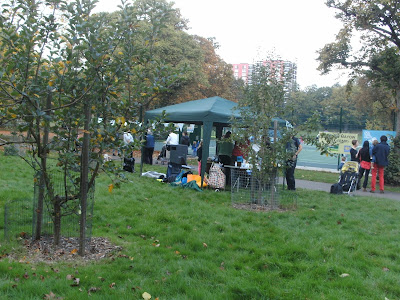 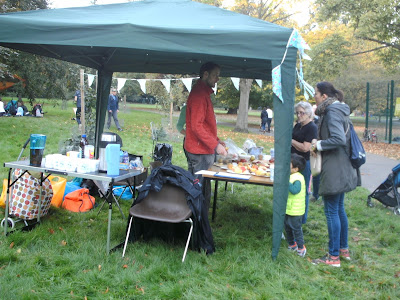 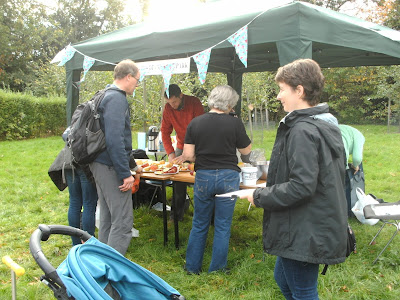 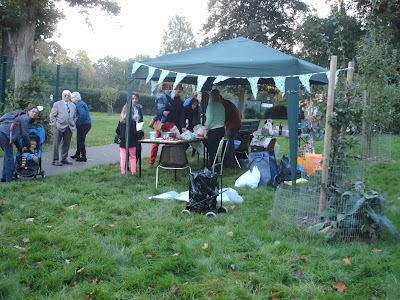 For those who wanted to learn more names of apples there was an Apple Variety Treasure Hunt. In and around the orchard appeared large cut-out cardboard apples with unusual names written on them. The task was to find all 15 cardboard apples and note their names on a sheet. To encourage a slower pace participants were asked to also add any item found in nature next to the apple variety named on the cardboard. Everyone who returned their sheet was a winner! 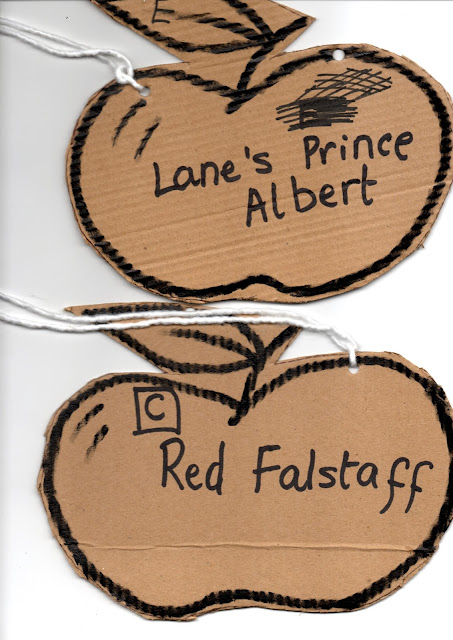 Well done to all the volunteers who put in time and effort. Verbal feedback from visitors was very positive.

In the countdown to our Apple Day in Mayow Park, the past two days have seemed a bit chaotic. Yesterday was all about waiting at home to receive the new orchard sign so that it could be installed before Saturday. When it arrived it had to be unpacked, creating a sea of bubble wrap plastic scattered over the corridor floor.
Today, the wait was for heritage apples we had ordered from Brogdale - four different varieties to use for tasting at Apple Day. Luckily they arrived before 9.30am. The apples from Brogdale were specially ordered: you won't be able to find these in your local supermarket.  We will also buy more common varieties for tasting on the day.
Today was already booked as the day that our five bat boxes were being installed.  The bat boxes and the new sign were installed thanks to Steve and Lee from Glendale.


The Friends of Mayow Park (FOMP) have held evening meetings to finalise arrangements for the day. We plan to set up two gazebos and to have  story telling in the woodland area nearby.We have also planned


Some more ideas we had for games and activities include apple bobbing and longest apple peel, drawing and poetry writing. Come along and join in.

The event is free and suitable for everyone. It is organised by Friends of Mayow Park. We are always keen to welcome new volunteers to help with events.
We will not have any of our own apples at our event. Some fell off the trees as part of the natural  'fruit drop' process of thinning out, some because squirrels or birds fancied them  and some were removed by volunteers if they showed signs of brown rot or were too crowded together. All this thinning helps to encourage larger fruits. But that still left  plenty of apples, pears and three quinces, none of which were ripe or ready for picking. Unfortunately all these remaining fruits were removed by people unknown. This is a blow for those volunteers who cared for the trees throughout the spring and summer hoping to share them at our community event. As we had already planned the Apple Day it was decided we would buy in apples - after all they are the stars of the show.
See you there!
Posted by FOMP at 14:39 No comments: