Four of the seven trees we planted in March have been adopted by families. They have agreed to water the trees once a week during the summer months, to keep weeds out of the mulched area and watch out for any pests and diseases which might affect the health of the fruit trees.
Here are two of the families in action:

Fruit blossom in the orchard

The orchard trees have been looking glorious as, one by one, they have blossomed. The following photos were taken between early April and end May 2016 as the trees blossomed at different times. Although some of the photos are in a previous post I included them again. Since these photos were taken some of the trees are already developing small fruitlets. 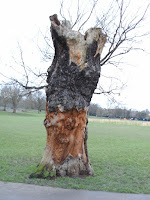 FAMILY TREE WALK
SUNDAY 5 JUNE 10.30-12 NOON
Come and join us to help find out more about the trees in Mayow Park and have fun with your family at the same time.
Activities on the day include:
1. Meet our special trees: Find out about the ancient oaks, monkey puzzle, dawn redwood, weeping silver birch, holm oak (the climbing tree), plus share stories, myths and legends about the trees.
2. Nature detectives: Identify trees by their leaves.
3. Orchard identification: Find out about the 11 trees planted in 2012.
4. Bark rubbings: Paper & crayons provided.
5. Tree measuring: Using different methods, we’ll  record the height and girth of some of the trees for the park’s record.
Meet us at our table at the Triangle by the café at 10.30 to get your activity sheets and join us on a guided walk.


For more information email: friendsofmayowpark@ymail.com
Posted by FOMP at 10:28 No comments:

our blossoming orchard May 2016

Have you noticed that the grass in our orchard has not yet been cut? There is a good reason. After our incredibly wet winter and early spring the ground in the orchard was extremely soggy until the end of April and some areas are still damp. Attempts to bring in heavy mowing vehicles to mow the grass would have left deep ruts in the mud or they would have got stuck.

On a personal level I am pleased at the delay. The longer grass looks attractive, has encouraged ground-feeding birds to forage and allowed more flowering plants to grow than we would have seen previously. Look carefully and you will see slim plants dotted around with white or pale lilac flowers, that stand taller than the grass. These are Lady's Smock (Cardamine pratensis) also known as cuckoo flower, part of the brassica family (think of cabbages and salad rocket). Although these plants are common throughout the UK, they prefer wet grassland - which summarises the state of the orchard grassland in recent months. 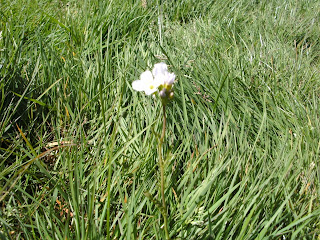 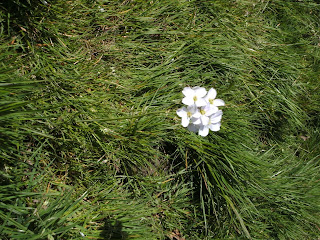 When we originally planted the first orchard trees in February 2012, the site was damp, not saturated. But planting in March 2016, after months of heavy rain, meant most of the site was unusually muddy and not ideal for our young trees.
Now that the ground in the orchard is drying, it is becoming rock hard again and cracks are appearing due to the heavy clay subsoil.
The recently planted fruit trees have started their once-a-week watering regime, tended by volunteers who have 'adopted' them, bringing water from home to water the trees as park water supplies are not easy to access.
Meanwhile the established fruit trees have been flowering in succession, attracting local photographers to capture the splendid blossoms. In future years, when the new trees will also flower, it would be a perfect time to celebrate the beauty of our orchard.