Splendid day for a lark in the park part 2

The Lark in the Park event on 30th June this year celebrated 140 years since Mayow Park was opened to the public, in 1878. Some people dressed up and some stalls included a Victorian theme though this was not obligatory.
Numerous community groups were respresented with stalls and there was plenty to do at the event.
Voluntary Services Lewisham,  Forest Hill Society and Friends of Mayow Park were there.
Food for the masses was provided by Min Albi (meaning Food from the Heart'), helping Syrian refugees in South London to use their cooking skills to gain work experience and entrepreneurial independence.
Opposite their food stall was the Women's Institute gazebo with some of their delicious cakes available to buy.
Forest Hill Society hosted the Lewisham Swifts group, raising awareness that swift numbers are in decline and how we can help these amazing birds.

The local Perry Vale Safer Neighbourhood Team was on hand to offer advice.
Dr Bike gave tips and help on caring for your bike.

Free tennis was on offer at the tennis courts. Young children were catered for  with a bouncy castle and soft play area.
Sydenham Arts provided musical activities in the bowls green.
Brown and Green cafe was open for business as usual.
Usborne Books had a stall which included Victorian toys.
Mayows Mutts, a local group of dogs with their owners, had a dog parade with raffle prizes.

The Friends of Mayow Park stall had a few Victorian activities aimed at children. Children could play quoits, practice skipping with skipping ropes and learn to play hopscotch using chalked markings on the tarmac path.

If that was not enough, they could make Victorian-style brooches.
They could also make thaumatropes. We called them 'spinners' for simplicity. 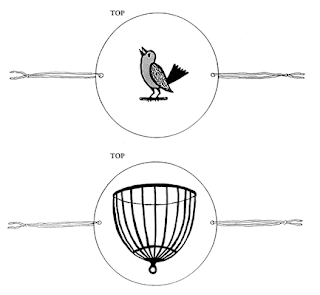 More on thaumatropes  can be found on this website:
http://www.mhs.ox.ac.uk/exhibits/fancy-names-and-fun-toys/thaumatropes/
Every child that took part in an activity received a paper bag printed with pictures of Victorian objects and containing loose sweets;  no plastic bags or plastic-wrapped sweets 140 years ago.
Children also received an additional gift of a small Victorian-style slate board and pencil.

Research for these Victorian related activities was carried out by Pippa, one of the active members of Friends of Mayow Park.
The whole event seemed to go very well. Thank you to Perry Vale ward for organising this enjoyable community event.
Posted by FOMP at 21:01 No comments:

Splendid day for a lark in the park Part 1

What a splendid day it was for a lark in the park in Mayow Park on Saturday 30th June 2018.
The event was organised by Lewisham Council's Perry Vale ward as a community event and community stalls were there in numbers. The event joined forces with Sydenham Arts who held their activities in the bowls green so the park was buzzing.  So many people smiling in the sunshine.

Community groups came to set up at 11am and public events  began at midday.
A Victorian theme ran through for some of the stalls in recognition of the 140th anniversary since the opening of Mayow Park to the public in June 1878.
For the Friends of Mayow Park it was also an excuse for a double celebration. The group (formerly known as Mayow Park Users' Group) held their very first official meeting in April 1993 and have been going for 25 years.

In recognition of this double anniversary, Friends of Mayow Park (FOMP) set up their stall to face the Victorian water fountain.  The monument commemorates the Rev William Taylor Jones who kick-started the process that was to lead to the creation of Sydenham Public Recreation Ground, later renamed  Mayow Park. While the fountain no longer works, it stands as a proud memorial to the origins of the park.

Our gazebo was installed in a jiffy and soon  all were busy preparing the table, signs and activities.

Children's Victorian art and craft activities were part of the FOMP offer and two young people took on much of the work to reach out to members of the public.

The FOMP stall displayed a number of items that might be of interest to visitors:
- an article from the Sydenham Society Summer 2018 newsletter, written by Steve Grindlay and explaining the creation of Mayow Park. 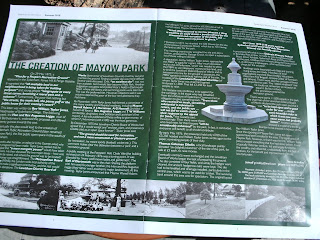 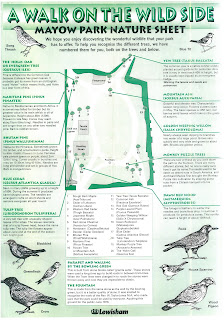 And a scrap book that FOMP volunteers are putting together called 'Mayow Park Memories'.   The front cover is a copy of an original painting by local artist Darren Russell Hayman. 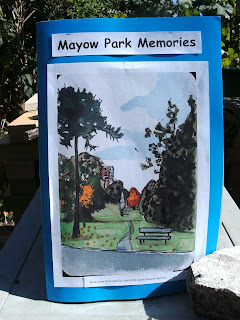