This page needs to be updated: play area was installed some years ago, Admins will aim to work on this page during 2021

Older children's play space: what it looks like at the moment:
The new play space will be created towards the northern border of the park, near the structure that looks like a bus shelter. We hope that this shelter will be replaced in time by something far more attractive. 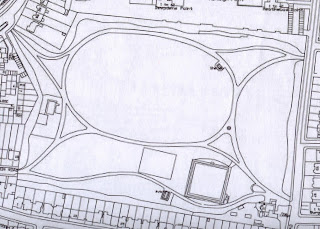 October 13, 2010 A Place for Children
Friends of Mayow Park had secured Playbuilder funding to develop an older children’s space. Unfortunately, in July 2010, the news broke that the Government was withdrawing Playbuilder funds for projects that were yet to start. As the friends group had consulted extensively with young people including those at two local schools, we did not want to accept that our efforts were in vain.
We are now applying for alternative funding and have contacted various playground equipment manufacturers and suppliers. We also have an interesting design suggestion created by a group taking part in the recent 2-day Introduction to Permaculture course in Mayow Park. We would like to talk to some young people on the latest plans as soon as possible.

The project to develop the older children’s space on the northern side of the park looks more positive now.     Playbuilder funds are back and the project  now looks set to go ahead. Friends of Mayow Park have had meetings with Greenscene (Lewisham’s parks department), with Glendale (the parks management contractors) and Groundwork ( a development charity who will manage this particular project).More planning sessions will be held before Christmas so that the design and quotes will be ready early in 2011, ready for action!