Mayow Park is a 5 minute walk from Sydenham Road but it sits within the Lewisham Council ward of Perry Vale and is the main green space for that ward. The Friends of Mayow Park committee were delighted when we learned that our park was to host the Perry Vale Ward assembly 'Lark in the Park' community event.
It was planned over a few months by Councillors and council officers who contacted various community groups and associations as well as Brown and Green Cafe in Mayow Park.
On 18th June the weather was overcast but generally dry making it ideal for this great event. Cars and larger vehicles were driven into the park at 5mph, lights flashing, and then driven out again according to the regulations, in order to set up. People were unloading banners, chairs, equipment, food, gazebos,  games and piling up a whole host of equipment onto tables to prepare eye-catching displays.
The Perry Vale ward officers and councillors had a small marquee located between the tennis courts and bowls green, by the middle path.
The old bowls green hosted taster sessions for those interested in croquet. However, the grass is cut as amenity grass these days since the demise of the bowls club and I gather that means the grass is too long to play a decent game of croquet.
Friends of Mayow Park set up a table next to our gardening space, by the raspberry bushes and under the holly tree. It was a good opportunity for us to publicise who we are and what we do as not all visitors were aware that Mayow Park has a Friends group. Some people signed up to go on our mailing list and to be kept informed about meetings and events. We had tree leaf identification sheets available for those who wanted to check out some of our park trees plus information on our orchard.
Here is a list of some of the other organisations that contributed to the day and their activities:

The Caribbean Mix cricket team were playing a match on the centre field during the afternoon for those who wanted to sit and relax.

It was a wonderfully busy day with many people enjoying the activities on offer, chatting, chasing toddlers, eating, smiling.  At 4pm the day of festivities came to an end and stallholders packed up. Many stayed to help  the Lewisham team to load equipment back onto the van.
A number of people commented that his event had felt like a village fete.
For next year I would like to suggest community music and dancing during the afternoon to reflect our multi-ethnic and multi-cultural community: we could have any combination of: Morris dancing and  folk music from around the British Isles, music and dance from the Middle East, the Far East, Mediterranean countries, India, Bangladesh, the Caribbean, the African continent, the Americas, Eastern Europe, Asia and Australasia. 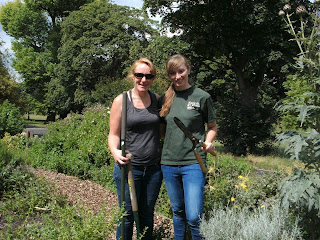 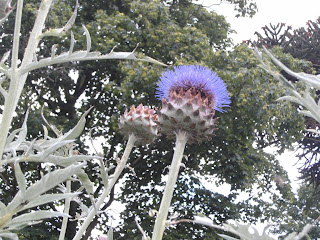 There is still more work to do as the bindweed has also colonised parts we did not manage to clear. So a call to park users for another workday is on the horizon.
Thank you to all the Nature's Gym folk who turned up and worked so hard to help.
Posted by FOMP at 21:37 No comments:

A month ago I started writing  about the Friends of Mayow Park family-friendly tree walk, which took place on 5th June and which included measuring tree height, tree girth and bark rubbings of a few trees.
I'll now try to complete that post
We moved on from the row of silver birch trees, past the former bowls green. Immediately on the right is a good example of an ancient oak that has been pollarded. Trees with a number of trunks above head height are called pollards.  Pollarding involves cutting branches off to encourage growth of new trunks above head height and was a common form of woodland management. The cuts, and therefore new shoot growth, were above the reach of grazing livestock belonging to commoners. This particular pollard had four trunks at about 10 feet high but one had to be removed around 5 or 6 years ago for safety. Seen below is the same tree from different sides. It has three trunks although you can only see two in the photos. 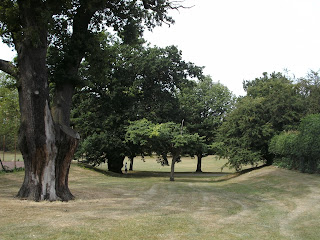 Mike, with help from some children, measured the girth of this pollard at 5.2 metres, which we estimated as around 300 years old.


Our next stop was the hornbeam. Although hornbeams are indicator trees for ancient woodland, this is a young tree that would have been intentionally planted.


Hornbeam leaves and seed pods are quite distinctive.

Before moving on we looked briefly at the orchard, opposite the tennis courts. The orchard now contains 18 fruit trees, all heritage varieties, which were planted in 2012 and 2016 with the support of the Urban Orchard Project.
Our next stop was the number 1 favourite tree in the park for many children . . . the climbing tree. Quercus Ilex or holm oak is easy to spot, not far from the Recreation Road gates. It is an evergreen oak that sheds its leaves throughout the year and casts such a shadow around it that no plants grow underneath. I recently met an adult in his forties who, as a child, loved climbing that tree. So it has really stood the test of time.

Heading back across the park we briefly stopped by a row of oaks that clearly look like they were intentionally planted as boundary oaks, to mark field or property boundaries.
We headed across the oval field to the tree we think must be the oldest oak in the park. It stands near the fountain and is another pollard. Its girth was 5.4 metres,  measured at a height of 1.3 metres from the ground. Could this tree really be around 340 years old? I'd welcome measurements of other oaks and age calculations from other people.