A member of  Friends of Mayow Park Facebook group posted a message on Friday 22nd July with sad photos about a mature oak tree . One of its major trunks had split and fallen from the main tree. From other comments on that thread, it seems likely that the tree had unexpectedly fallen the evening before around 7.30 pm. Being later in the evening, the park was not busy and luckily no-one was hurt as the tree is near the path that goes past the older children’s play area.
Our Facebook group is very effective at reporting positive or negative happenings in the park which helps to spread the word quickly. The damaged tree was reported to Glendale Lewisham via email the evening of the day it was posted on Facebook. The fallen section looked unsteady but it seemed unlikely that anything would happen on a Friday evening after office hours .

These photos were taken on the Friday afternoon: 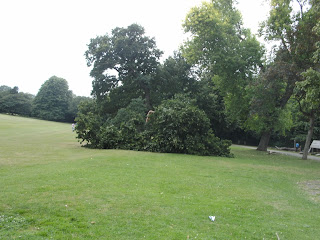 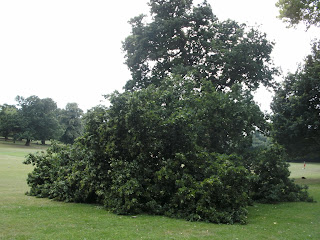 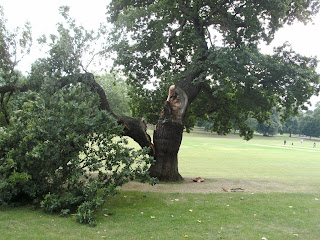 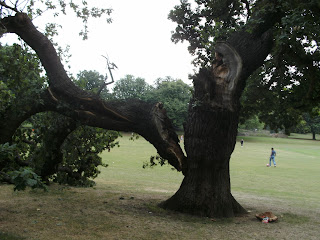 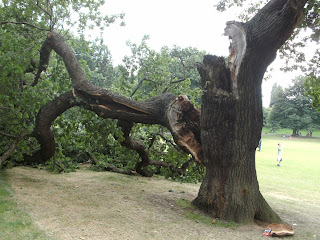 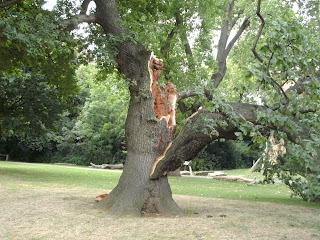 How good to find out  that first thing the following morning Glendale staff came and draped striped tape around the tree so that people would keep their distance. No tree surgery could take place at that time. Any major works and tree surgery have to be approved by Lewisham’s arboricultural officer and skilled tree surgeons need to be called out so I did not expect much action for days.

TREE SURGERY ONE WEEK LATER
On Friday 28th July an arboricultural team from Glendale Arboricultural Services arrived to work on the fallen oak. The team, wearing harnesses and hard hats, skillfully cut up the trunk that had split from the main trunk. They had to cut most of the remaining standing trunk too, as it  was leaning to one side and could become dangerous. 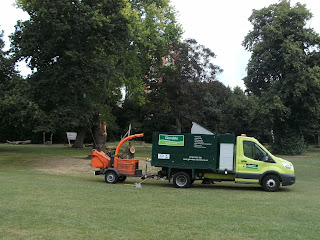 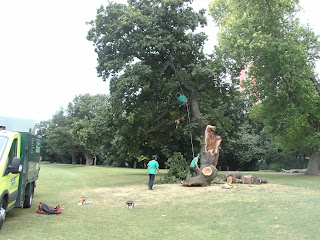 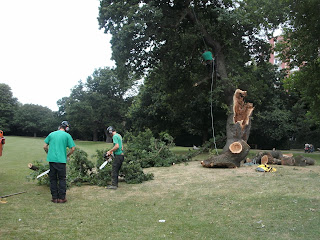 One of the guys explained that they were aiming to leave much of the main trunk as a 'monolith' i.e. a dead tree left to decay in a standing position to allow it to support a wide range of species that are dependent on decaying wood. 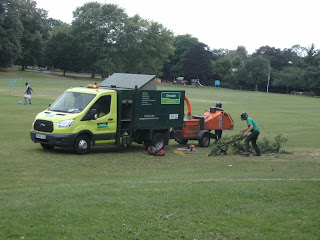 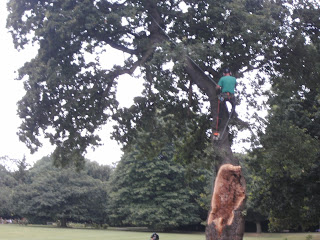 Woodland management can include a standing dead tree. The team made the tree safe by reducing its height . The hope is that the tree will continue to support a variety of animal and plant species that rely on dead wood including fungi, invertebrates, small mammals and birds. As we saw, the team also left some logs close to the tree to encourage invertebrates. 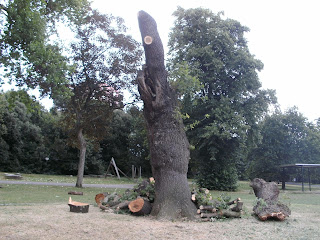 The arboricultural contractors showed great care for the tree as well as safety for themselves and park users. As a Friends group we care about creating a range of habitats for the wildlife of the park so we wait to see if the tree will survive, like its near neighbour the 'lightning tree' oak about 20 metres away. Look carefully at the first of these two monolith photos and you should see a small living branch . . . a sign of hope that the tree may survive.


We don’t know the age of the tree but it is likely to have been over 200 years old. Whether is partially grows back or whether it will die, the tree will continue to serve a purpose in the park.
Posted by FOMP at 17:25